Let us now turn our gaze to the man whose job brings him closest to a heart attack every day, the White House Secretary of Prevarication, Sean McSpice. 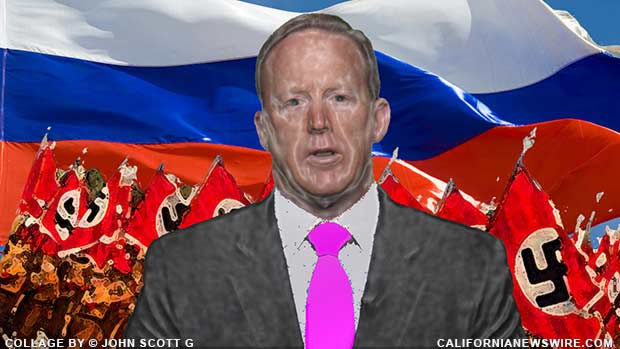 Amidst all of the conservative attempts to destroy American values is the daily equivocation dance performed by shifty-eyed White House Press Secretary Sean Spicer. Or, to use his official title and full name: ErsatzFactsFuhrer Sean Michael Melissa McCarthy Spicy Spicer.

There is nothing Spicy won’t say to defend his boss, Donald Trump, our nation’s first illegitimate president. And that is a difficult assignment. Imagine if your job required you to continually praise someone as ignorant, greedy, incompetent, racist, misogynistic, and xenophobic as Donny Danger.

But Spicy is up for the down strokes. There is no lie too big, too ridiculous, or too stupid for Sean Spicer. No matter how harmful a conservatard policy may be, Spicy will defend it.

Stealing a Supreme Court Nomination: According to Spicy, Neil Gorsuch isn’t a neo-Nazi who wants to spread pro-corporate, anti-American law across the land. “Herr Gorsuch is a fine, upstanding white power guy, I mean powerful white guy, um, I mean conservative judgeperson, and the White House has full confidence in him,” Spicy said. “Plus, he’ll look great in those floor-length black dresses the Supremes wear.” While we’re on the topic, Spicy is also in favor of the traitorous actions of Mitch McConnell and his Senate rethuglicans in blocking the court appointment of Merrick Garland throughout 2016. “Under Mitch,” Spicy said, “the Senate just took a pause for the cause.” The cause being the placing of another rightwing nutjob clucktard on the highest court in the land. (And by the way, Neil, just how small a person do you have to be to take someone else’s rightful place?)

Dismantling the State Department: According to Spicy, this is not a problem because the US is buying so much more ammunition. “Don’t worry,” Spicy said, “we’ll be able to successfully defend ourselves in all the battles we start.”

Destroying the Public Education System: According to Spicy, there is nothing wrong about Betsy DeVos trying to raise generations of ignorant jebus freaks. “We aren’t going to have much of a future on the planet so what the hell,” is how Spicy puts it.

The Goldman Sachs Cabinet: According to Spicy, everything about this is hunky-dory. “It may seem like a problem,” Spicy says, “but it’s $not.”  Chided for making such a horrible and juvenile pun, Spicy smiled and quoted lyrics from “The Money Song” from the Broadway musical, Cabaret.

Having a Racist as Attorney General: According to Spicy, white power douchebag Jeff Sessions is just what the founding fathers intended. “Slaveholders formed our nation and if it’s good enough for them, it should be good enough for us.”

Putting a Mental Defective in Charge of Nukes: According to Spicy, doofus Rick Perry is a bright boy. “I think his highly acclaimed work on ‘Dancing With the Stars’ proved that he’s ready to head the Department of Energy,” Spicy said. “Besides, there is no mention of nukes in the Constitution so apparently there is no need to know much about that.”

Cutting Social Programs: According to Spicy, this is just good fiscal policy. “That whole food stamps thing is very costly,” Glumface Gumface said. “When it comes to inner cities I think we should just have drones drop cartons of apples and cheese over the neighborhoods and whatever happens, happens.”

Privatizing America: According to Spicy, “this will be the greatest advancement in the brief history of capitalism and our current death spiral of democracy.” As a practical matter, “Americans are going to have to learn to pay their own way,” Melissa McSpice told a stunned White House Press Corps., adding, “That’s why reporters will now be charged to attend these press conferences.”