In an ‘off the record’ conversation, a drunken GOP advisor reveals the truth about how Trump represents the Conservative movement. 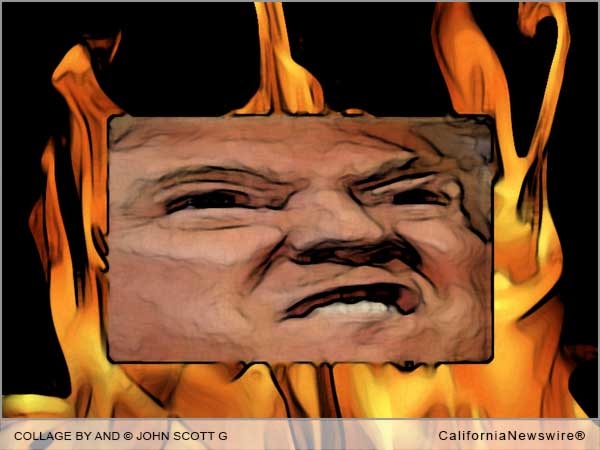 “Okay, it’s off the record,” the blogger said to him. I just nodded at him but it wasn’t clear if he could focus well enough to see me.

“We’re talking deep background, baby,” the GOPer added for emphasis, except it came out more like “dee packgroun, baybee.”

“No, you have to promise,” he said, except it came out more like “Naw y’hafta proms.”

“Him, too,” the man said, pointing vaguely in my direction.

“Fingers crossed and hope to lie,” I told him in my most sincere tone of voice. He nodded and did another shot.

“So, what do you think about Donald Trump?” the blogger asked.

“Y’know what I think?” he asked us, his voice getting a little too loud.

“I think that this time we’ve really done it. I mean, we have absofreakinlutely done it. DONE IT!”

“What have you done?”

“We have achieved perfectly perfect perfection.”

“Thas right, with the Trumpster!”

“Right,” the blogger said soothingly. “You say that Trump is perfect. Tell me more about that.”

“And we had some mean SOBs like Nixon and Cheney and McCain.”

“I mean, wow,” the GOP operative said, “Cheney was the biggest liar of a pres’dent.”

“Cheney was a Veep.”

“Aaaugh, get outta here with that crap. Dubya was just a puppet. Cheney ran that show.”

“Right, right,” the blogger told him. “What about Trump?”

“Trump.” he said. “Trump!” he said again and took another shot. “Trump is the grandest. He’s the one. I mean he is absofreakinlutely the best of the bunch.”

“Tell us why Trump is the best,” the blogger said.

“All righty,” he said. “I will do that.” He took another shot and stared off into space.

The blogger and I exchanged glances. After a few seconds, the blogger leaned forward to get the man back on topic: “You said Trump has got it all. What do you mean by that?”

“Okay, okay, look, there’s a checklist. And he’s all checked off.”

“A checklist. It’s a checklist of attabutes.”

“Attributes! Yes! Trump has scored the top score of the checklist score of attabutes.”

“Trump is the best on the checklist.”

“Damn right you are!”

“What’s on the checklist?”

“Oh, okay, okay, okay,” he said. “Here’s the deal. The GOP wants candidates who check off as many of the items as poss’ble. Look at how well Trump does. Ignorant — check. Racist — check. Missogist — check.”

The blogger and I exchanged glances again. Should we prompt the inebriated oaf or just let him slump there at the bar? Fortunately, he drifted back to his monologue.

“Trump!” shouted the GOP campaign staffer. “Trump is the double triple trifecta of trash, tripe, twaddle, and trash. I tell you, ladies and gentlemen, Donald Trump is everything the GOP has been driving toward for years!”

The blogger surreptitiously checked his pocket digital recorder, making sure he was getting all this.

“Donald J. Trump is the perfect Conservative candidate because he perfectly represents Conservatism. The right finally got it completely right!”

And with that the man laid his head down on the bar. The blogger looked at me for a second, shrugged, and leaned over while holding his digital recorder in front of the guy’s face.

“So you’re saying,” the blogger whispered, “that Trump is magnificently moronic, right?”

“And that makes Donald Trump an ideal GOP presidential candidate.”

The blogger switched off his recorder. “Now we’ve got an interesting problem,” he said to me.

“This was on background.”

“I still don’t think we can’t use this.”

“Then why did you record it?”

“Well,” he said, glancing around the bar. “You never know when something like this will come in handy.”

“Like if I want a job working for the GOP,” he said. “Bet they’d pay a lot to suppress this story.”