Presented for your entertainment and edification, here are a few thoughts about some of the evils that exist in today’s society. You’re welcome. 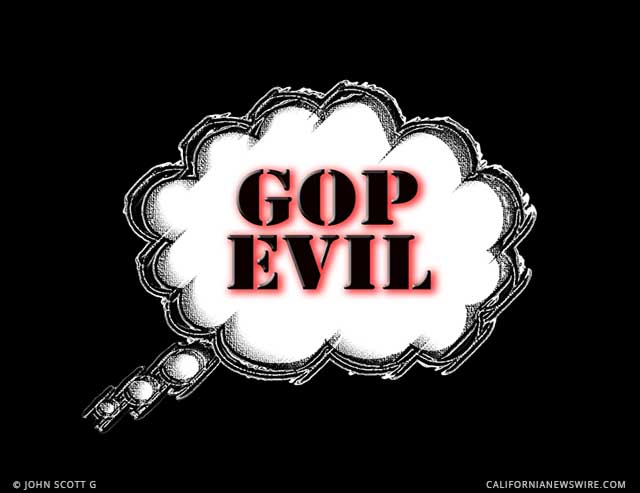 Conservatives are opposed to many things that sane people support but Cons don’t have the mental resources to formulate logical reactions. For example, if something valuable like Planned Parenthood was called the “Nancy Reagan Women’s Health Initiative,” then Conservatives would support it. (This would end only one part of the Republican war on women, but hey, ya gotta start somewhere.)

Conservatives don’t mind being racist but don’t like having it pointed out. One standard denial from GOP insiders goes like this: “Look, we hate liberals whether or not they’re nig- uh, African-American.” Another denial from GOPers is the always-popular flat-out lie, “Not all Republicans are racist.”

Morons who are part of the GOP base are actually proud to be racist: “We’ve been a-votin’ racist for yars and yars and we done got squat fer it. Now, thanks to Trump, we’re a-gonna git it!”

You may have noticed that Conservatism is built on lies.

“No, we have real points!” shout the Cons.

If they had real points, they would have no need of the Fox Fake News channel to spout their prevarication, prejudice, and propaganda.

Progressives, liberals, and rational people recognize all of that. But if turned loose, Conservatives would subvert all of it in order to boost short-term profits.

Right now, you are an unpaid participant in an experiment involving your food. GMOs (genetically modified organisms) are not identified in the marketplace. If you’d like to be paid for your role as a guinea pig, send an invoice to Monsanto. If you’d like to halt this experiment, stop electing Republican congresscritters.

Ronald Reagan (the Alzheimer’s President) nominated three unqualified people to the Supreme Court. The disgusting Robert Bork was rejected but muddlebrained Anthony Kennedy and the completely odious Antonin Scalia both made it onto the bench.

George W. Bush (the Puppet President) nominated three unqualified candidates: Harriet Miers, John Roberts, and Samuel Alito. Miers was basically a RWNJ secretary-flunky and was removed from consideration amidst much laughter. John Roberts probably hopes that his two decent votes may buy him a bit of respect when history otherwise laughs at his incompetence. As for Samuel Alito, crypto-fascists cackle with glee about this human turd making onto the bench.

Blast from the Past:

It is time to bring back a scurrilous phrase from our nation’s tortured history. It was originally a statement that was both ominous and odious but which might now be lifted to a higher and brighter purpose. Here it is: The only good conservative is a dead conservative.

Thanks to the current conservative candidate for bringing about some interesting changes in modern English usage:

“Don’t be such a Trumphole.”

“If America elects McSniffles (AKA Mr. Hair-Do, Mr. Grabandgrope, The OrangeApe, etc.), then everyone in the country is going to be Trumped.”

The last line in the previous section doesn’t go far enough; if Dangerous Donald gets elected, everyone in the world is going to be Trumped.