From its sinful foundation to its current crop of liars and bunko artists, here is the story of the pestilence called conservatism. Concise! Accurate! Easy-to-read!* (*Note: Language may be too advanced for Trump supporters.) 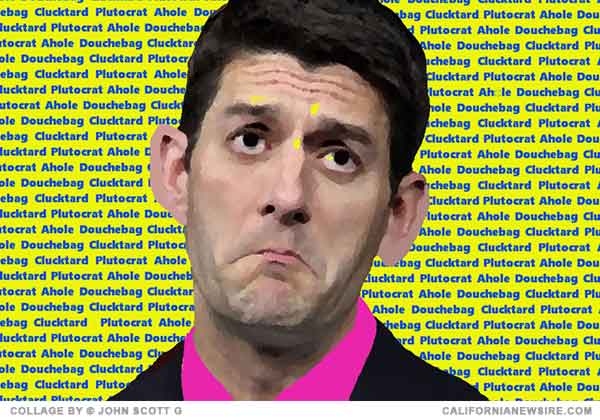 We are pleased to present excerpts from a new book in the popular “…for Dimwits” series, this one dealing with conservatism, the anti-American movement that is even now attempting to destroy democracy.

HISTORY: There were conservatives in the United States before there was a United States. During the late 1700s, “Tories” wanted to remain under the yoke of the British rather than live in an independent nation, principally because they wanted to protect their property (the “I’ve got mine” philosophy so evident today in the work of people like Paul Ryan and Mitch McConnell). Throughout the entire history of the U.S., the conservative cabal has put up roadblocks to progress, liberty, and democracy — and they will continue to do so as long as they can profit from it.

IMMORALITY: Because conservatism is based on one of the seven deadly sins, the movement attracts people of low morals. To bolster their ranks, conservatives welcome any and all reprobates to their clan. Racists? No problem, come on in! Misogynists? Welcome! Plutocrats, theocrats, kleptocrats, xenophobes, homophobes? Glad to see ya! Fascists and nihilists? You betcha! With the built-in dishonesty of their movement, it is simply not possible for a decent person to be a conservative.

NOISE, NOT NEWS: Lacking facts and morality, the conservative movement must rely on distortions and prevarications to spread their sickening messages. If they can pervert the mainstream media, they do so by creating and spreading what they call “alternative facts,” or what normal people call lies.

UNREALITY: Conservatism relies on a multi-pronged attack on reality, consisting of: (1) Mendacious media, such as the Fox Fake News Network, the Salem Witch Hunt Network, Sinclair “Emphasis on the Sin” Broadcasting, and all of the right-wing nut-job programming. (2) LieSites, such as NotBrightBart, WorldNutDaily, StormTrooper, Sludge Report, InfoSpores, and the like — all specialists in the art of “clickbait for the uninformed.” (3) NoThink Tanks, such as Heretic Foundation, Amerikkkan Enterprise Institute, and the Cuckoo Cato Institution — all of which are staffed by highly-paid whores who are specialists in the distorting of reality in favor of the wealthy and greedy.

ANTI-AMERICAN: Conservatives push policies that help corporations and the wealthy while causing harm to the middle-class, the poor, students, women, the LGBTQ community, seniors, veterans, people of color, the ill, and immigrants. As such, conservatism is more than anti-American — conservatism is anti-humanity.

TRAITORS: Covering up the collusion with Russia as it interfered in the U.S. election makes Trump a traitor along with every two-bit tinhorn conservatard a$$hole in office around the country.

PROCRASTINATION: Why are House and Senate conservatives holding off on impeaching the orange madman and the dead-eyed Dense Pence? Because they are controlled by their greedy donors who are pleased that the Trump era has been glorious for conservatism: (A) They already have blocked Merrick Garland from the Supreme Court in favor of a neo-fascist. (B) They hope to hang onto Cheeto Mussolini long enough to take healthcare away from 24,000,000 Americans. (C) They will back the treasonous Trumpasaurus in order to try lowering taxes for the top 1%.

THE ARTS: William Shakespeare was on to something when he wrote this: Eye of newt, and toe of frog / Wool of bat, and tongue of dog / Adder’s fork, and blind-worm’s sting / Lizard’s leg, and owlet’s wing. Those lines from “Macbeth” seem eerily accurate as a description of conservatives, especially when viewing the dregs of society who support the fascist GOP president and the racist Republican House and Senate. Shakespeare was prescient in “Macbeth” but there is a verse that is even closer to the truth of what makes a conservative: Heart of hate, and mind of mush / Soul of filth, and spine of slush / Devil’s bile, and serpent’s bite /Idiot’s speech, with oafish spite.

FUTURE: It is unclear if decent people are going to rise up and toss out the trash. The “Indivisible” movement shows signs of life and may be the only hope for America. The United States was able to practice democracy from 1776 to 2016 when conservatives put it on hold — and now, every decent person in the world is waiting to see if democracy will return for another run in America beginning in 2018.

###
Editorial Note: Be aware this series of political articles may contain intentional satire by author John Scott G and is not fully based on fact (aside from some of the stupider things, which are sadly 100% real). Hopefully you can tell the difference?