Betsy DeVos has a deep and profound love of fairytales and she plans to slather that love all over the children of America. 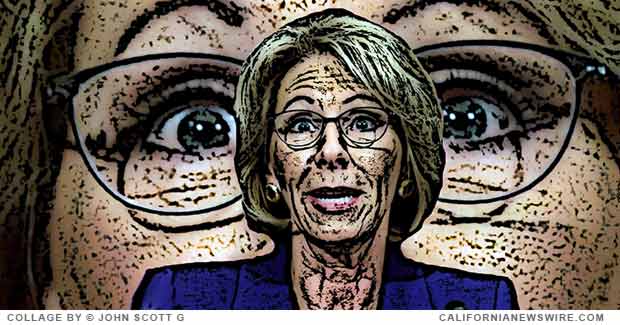 You often hear the phrase “conservative values” but what does that phrase mean? It is similar to phrases like “square circle” and “dry water” in that it is an oxymoron — a contradictory or impossible statement. Nowhere is this better illustrated than in the Trump administration’s cabinet appointments: several of the rightwing nutjobs he appointed are on record as knowing nothing about the departments they will now lead; several are on record as wanting to destroy those departments.

Take, as one odious example, the doophus with a pole up her anus, Betsy DeVos.

As with all conservatives, Betsy is blind to her blind spots — which include ignorance, prejudice, religiosity, and a hatred of democracy. Her repulsive proselytizing for the forces of RCT (Radical Christian Terrorism) will soon result in new tests being administered to schoolkids all across our nation.

The Conservative Edumacashun Multiple Choice Profishinsea Test consists of two parts — a Civics section and a General section. Try a few selected questions and discover what schoolchildren will soon be facing in their voucherized classrooms during this, Our Time of America’s Shame:

2. Who wrote the Declaration of Independence?
a) Thomas Jefferson.
b) Paul Revere.
c) God.

3. The Constitution has how many amendments?
a) 27.
b) Eleventy-three.
c) A baker’s dozen.

5. In what month are taxes due each year?
a) April.
b) The month after the War on Christmas.
c) Smart people don’t pay taxes.

GENERAL:
6. If a train leaves Baltimore traveling at 55mph, how long will it take to cover 55 miles?
a) One hour.
b) 55 minutes.
c) Jebus can make trains do anything.

7. Name the verb in the following sentence: A Trump supporter hit a woman.
a) Hit.
b) Any word can be verbed.
c) It’s not verbal, it’s typed.

8. Complete this sentence: If you do not learn from the mistakes of history, you are ______________.
a) doomed to repeat them.
b) classmates at Trump University.
c) watching FoxFakeNews.

9. True or False: libraries are a valuable part of the community.
a) True.
b) Books can be scary.
c) We don’t want no damn Liberians in our country.