Conservatives deny that the rise of Trump demonstrates their racism, anti-Semitism, and misogyny. “At least half of that stuff is half made-up,” says a (supposed) Trump spokesman. 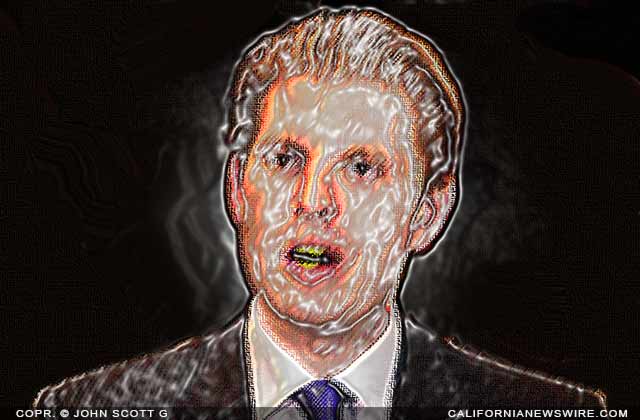 Editor’s Note: this is a satirical article. No actual interview with any Trump advisor took place.

People in the Trump Conservative Coalition do not like the media. They sometimes appear friendly to broadcasters who are complimentary, but those who insist on asking pointed questions are detested bigly.

Which is why it was such a surprise when Fred Gaffanay, a Trump Presidential Transition Team member, offered to sit down and chat with me about what the American people can expect from a Trump presidency.

“Let’s start with something in Trump’s victory speech,” I began. “Trump said that the country is going to be repairing roads, bridges, schools, hospitals, and airports.”

“Yes, Mr. Trump is in favor of a great infrastructure initiative,” Gaffanay said.

“Okay, I have two questions about that,” I said. “First, Obama proposed infrastructure spending and it was rejected by Republicans in congress.”

“So conservatives feel that what’s good for America depends on which party proposes something?”

“Oh no,” Gaffanay replied. “The party proposing something makes no difference if the plan will strengthen the United States.”

“But the way conservatives vote on it will be different.”

“Yes, it certainly is,” I agreed. “The other question about Trump’s infrastructure plan is that it is a massive giveaway of tax credits to for-profit firms building for-profit projects and therefore would not provide the type of infrastructure upgrades the country needs.”

“Where did you get that?” he asked.

“From reading the plan.”

“Oh. Well, if you’re going to go down that road…” he said, letting the sentence trail off.

“Well, it’s like Sheryl Crow said, ‘Every Day is a Winding Road,’ right?”

“What does that mean?” I asked.

“Next question,” he said.

“All right, what about the problem of providing healthcare coverage to all citizens? Other advanced nations do this but conservatives in the USA resist it.”

“Oh, we want everyone to have healthcare coverage, but they have to pay for it. There is no free lunch, you know.”

“But some people can’t afford to pay for healthcare coverage and still have money left over for food.”

“Then that problem will take care of itself,” Gaffanay said smugly.

“But the rest of us will have to pay for the medical problems of families as they starve to death,” I pointed out.

“You can donate to those people if you wish,” Gaffanay said.

“That’s missing the point,” I replied.

“Okay, look,” Gaffanay said, “what will happen is that we will be fully engaged in seeing to it that our attention is always focused on the most pressing issues that greatly affect the well-being of the United States of America and not be diverted by topics that are ancillary, superfluous, nonessential, redundant, and unessential.”

“In other words, we’ll all just look the other way.”

“I’m not sure that will work.”

“The success of Conservatism depends on it,” Gaffanay said, “and the American public’s lack of knowledge is not letting us down.”

“You have a point,” I admitted. “Let me ask you about taxes. I pay taxes. My neighbors pay taxes. Everyone I’ve ever met pays taxes. But Trump doesn’t pay taxes. That doesn’t seem fair.”

“Mr. Trump pays all of the taxes he’s required to pay under the law.”

“And now he wants to allow all rich people to pay even less in taxes.”

“Well, they are the job creators and they should be rewarded for that,” Gaffanay said primly.

“Warren Buffett is a job creator and he pays taxes.”

“Mr. Trump will be removing that burden from Mr. Buffett.”

“I guess we’ll see about that,” I said. “What is being done to end all of Trump’s many conflicts of interest?”

“What conflicts of interest?”

“All of that is simply a media-generated tempest in a teapot dome,” Gaffanay said, getting the analogy wrong. “The best policy procedure for Americans would be to continue on one’s expected course of action with the realization that there are no indicators of actuality to discern.”

“In other words, ‘move along, nothing to see here,’ is that it?”

“I see,” I said. “What can you tell me about the stories regarding Trump’s embrace of the KKK and alt-right hate groups?” I asked.

“That they’re just that — stories. At least half of that stuff is half made-up,” Gaffanay said. “Honestly, Mr. Trump wants to work for all Americans,” Gaffanay added.

“Uh-huh,” I said as eloquently as possible. “Let’s look at some things that are not made-up: Jeff Sessions, Trump’s choice for Attorney General, is a racist, and Steve Bannon, a White House advisor, has ties to Breitbart, a notorious home for blatant misogyny, white supremacy, anti-Semitism, dangerous conspiracy theories…”

“Hold on, hold on — I think you’ll find that the policies backed by Mr. Trump will take into consideration all points of view and that the Trump administration will advocate on behalf of those who are true loyal American citizens,” he said. “The conservative approach encompasses strength as well as compassion,” Gaffanay insisted.

“So you’re saying that conservatives are now offering a kinder, gentler white nationalism,” I suggested.

“Thank you for your time,” I said. “I’m sure that Americans will now feel a lot better about what’s going to happen to them over the next four years.”

New Memoir on Picasso Makes a Number of Extraordinary Claims