We are proud to join the frivolity of Awards Season by recognizing a few of the more spectacular “fails” by some very well-known people and institutions. When it comes to the fine art of losing, here are some big winners. 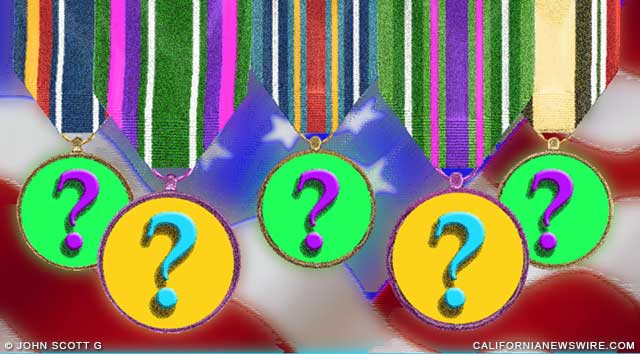 Welcome to the first-annual Dubious Distinction Awards — yes, it’s the Dubees, a truly grand and glorious celebration of “meh.”

As we about to begin the First Year of America’s Shame, we must take stock of the situation in an unbiased and clearheaded manner, which is why the following reactions come immediately to mind: Dread. Horror. Terror. Gag. Retch. Alarm. Angst. Loathing. Disgust. Revulsion. Fear. Dismay. Repugnance. Fright. Repulsion. Panic. Shock. Nausea. (One could go on.)

On the bright side, this is a good time for people like me who write political commentary and zeitgeist-based novels. And why are the prospects so rosy for authors of op-ed pieces, apocalyptic fiction, and satire?  Because boy-oh-boy are we going to have plenty of material for the next four years!

But right now, let us take a moment to recognize those who achieved astonishing levels of degradation during the past year. New heights of depths, if you will. So without further ado here are the not-so-esteemed winners…

On a personal note, let me say how sorry I am about the way things worked out. You had to contend with thirty years of rightwing lies. You had Russian state-sponsored hackers working against your campaign. You had corporate media resisting everything you did. You had our own FBI working against you. You had a campaign staff that rarely bothered to emphasize the positive aspects of your candidacy and who had you ignore millions of citizens in the Rust Belt. And you still won the popular vote! It was just your bad luck to be the sane candidate in a time of insanity. Nobody could foresee an election where nearly 63,000,000 voters took leave of their senses (or didn’t have any to begin with).

You saved the world economy from the GOP’s financial melt-down. You rescued the U.S. auto industry from the Republican Recession. You worked hard to get unemployment to below five percent. You extended healthcare coverage to twenty million more Americans. You helped put financial safeguards in place for the entire nation. You pulled the world toward ecological responsibility. You brokered a nuclear non-proliferation agreement in the Middle East. You even helped lower domestic gasoline prices. You accomplished all of that despite treasonous obstruction from rightwing douchebags in Congress. But still, your place in history will be: “The Last Guy Before Fascism Took Over.” Sorry, Barry… legacy’s a bitch.

Yes, I know that you’re being lauded in so many ways right now. “Anti-Logic Fast-Talker of the Year” is just one of your many justly-deserved trophies. (Two others are “Spokesliar Extraordinaire” and “Aging Barbie Doll with a Meth Addiction.”) But today we are recognizing you with a Dubee for showing all daughters and moms everywhere how a professional woman can easily train herself to accept money for giving up her soul.

Way to go on your long-overdue comeback, big guy! You are still scary as hell and twice as ugly! (Wait, that was actually Rudy Giuliani? Oh. Crap. Well then, never mind.)

I know what you’re thinking, that you’re a big winner. With your unrestrained ego, you always think that. But you need to look at your victory in perspective. Your constituency is comprised of greedwhores, goons, bigots, thugs, cowards, and moral defectives. You are loved by people with the collective I.Q. of a rabid squirrel. Plus, there’s the fact that if you or your fellow conman nutjobs attempt to take away Social Security and Medicare, that same constituency will roast your corpulent carcass in the street outside Trump Tower and use your comb-over as a toilet scrubber.

We are not only honoring The Big D, we are eulogizing it. Democracy may have lasted 186 years in Athens but here in the United States it lasted 240 years — so, congrats to us — we had a good run! Now that it has come to an end, some of us have to cope with a few minor setbacks in the areas of economic fairness, justice, race relations, gender equality, healthcare, clean air, water purity, the ability to educate our population, and so on. But a nation comprised of low-information voters — what H.L. Mencken called the “booboisie” — has no time for any of that stuff. Most of the country is caught up in the new world order where anyone seeking to wear a coat of many colors will be outnumbered by those wearing brownshirts.

If you’re a moron who voted for Trump or any of the other members of the Party of Stupid, we say unto you: Happy New Year 1933! For the rest of you, here’s hoping the country can begin a new democratic era starting with the 2018 midterm elections. That will be a genuine distinction.