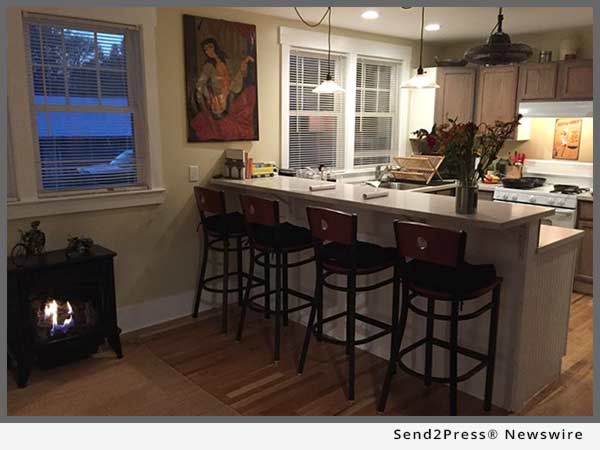 ASHEVILLE, N.C., Dec 05, 2016 (SEND2PRESS NEWSWIRE) — Cottage Cooking, a cooking class business in Asheville, N.C. where their motto is, “Enter as strangers, but leave as friends,” is excited to report that its guests will now be entering into a new kitchen.

John Godts and Liisa Andreassen, owners of Cottage Cooking, had no idea that when they started their cooking class business less than two years ago that there would be such a demand for their services.

“We started it on a whim, and it’s turned into a very viable second business for both us,” Andreassen says. “When we first launched, we thought we’d do two to three classes a month. Now, we have some months where we’re doing as many as eight or nine.”

As the business has grown, the couple decided that the kitchen needed to also. So, Godts, the owner of the cottage decided to add an addition that is separate from, but adjacent to the original home. While the old kitchen could accommodate up to four, it was tight. The new kitchen is still limited to groups of up to four, but there is much more room to spread out and cook now.

And, the new kitchen still maintains the charm that was associated with the old one. While the old kitchen had a wood burning stove and original hardwood floors dating back to the turn of the century, the new place boasts a barn door, crafted by Godts, a trap door that goes to the garage, a cozy gas stove and interesting artifacts and photos from the couple’s many travels.

There’s also a new deck that was added on and the couple hope to give grilling lessons this spring and summer.

“This new space has opened up even more opportunity than before,” Godts says. “We’re looking forward to what the future brings.”

Founded in March 2015, Cottage Cooking was started to fund the couple’s passion for travel. Cooking classes are designed for the home cook and a typical class is designed like a dinner party where guests prepare and eat an appetizer, main course and dessert.

This press release was issued on behalf of the news source, who is solely responsible for its accuracy, by Send2Press Newswire. To view the original story, visit: https://www.send2press.com/wire/cottage-cooking-in-asheville-gets-a-new-kitchen/

Asheville Cooking Classes – A Fun and Educational Alternative to Dining Out