GILROY, Calif. /California Newswire/ — “It is never too late for a second chance at love,” says Patricia Bubash, Licensed Professional Counselor and author of a new book, “Successful Second Marriages” (ISBN 978-1-58909-563-2), published by Bookstand Publishing. “Having experienced a failed second marriage, I wondered why so few second marriages work,” says Bubash, who has been an educator and counselor for over 30 years. “Several years ago I decided to make this a personal project. I wanted to talk with couples who had achieved what I had ‘not.’ I wanted to hear the positive stories of couples that had taken a second chance, and were having happy and successful marriages.” 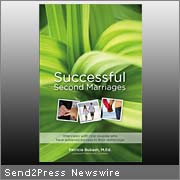 Successful Second Marriages is the result of this project and includes interviews with nine couples who have achieved success in their remarriage as well as the author’s often humorous and candid reflections on her own personal experiences and discoveries of what makes for a successful remarriage. “I know I am a better partner because of these couples and their willingness to share their personal stories with me,” says Bubash.

Bubash points out that the recent movie Nights in Rodanthe, starring Richard Gere and Diane Lane, is also about “it never being too late for a second chance at love.” Night in Rodanthe, however, ends tragically with no future for its Hollywood couple, whereas, Successful Second Marriages illustrates the positive future for couples who have taken a “second chance at love.” “I wanted to provide hope and encouragement,” say Bubash.

Patricia Bubash received her M.Ed. in Counseling from the University of Missouri, St. Louis. Working with students and families has been her true calling for over thirty years. For more than twenty years she has presented workshops at the community college on a variety of topics relating to parenting issues, self-esteem, career assessment, children and divorce. Patricia is a Licensed Professional Counselor in the state of Missouri and past president of the St. Louis Counseling Association. She performs volunteer work to help at-risk-children and she is a past board member of Kids in the Middle.

Ms. Bubash is available for speaking engagements and book signings. She can be contacted through her website at successfulsecondmarriages.com.

Successful Second Marriages is available from: