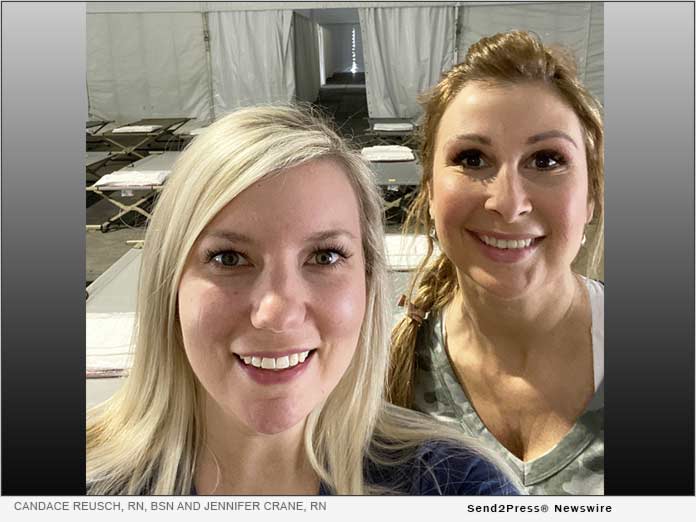 CRESTVIEW HILLS, Ky., Jun 15, 2020 (SEND2PRESS NEWSWIRE) — Owners of a medical aesthetics practice in Northern Kentucky used the temporary shutdown of their business as an opportunity to help with COVID-19 relief efforts. Candace Reusch, BSN, and Jennifer Crane, RN, owners of Zero Gravity Med Spa, are just getting back into the swing of things at their medical aesthetics practice, but their recent return from a welfare mission that sent them hundreds of miles away to the front lines of the COVID-19 pandemic left an indelible mark both women said they won’t soon forget.

When their practice was no longer able to see patients due to governor’s orders back in March amid the outbreak, the two veteran nurses said they couldn’t deny the urge to help with relief efforts. Crane, who formerly worked as a travel nurse, reached out to the CEO of her previous company to inquire how she and Reusch could lend their combined 20 years of nursing experience to help. Only two days after that phone call, the pair were on their way to the particularly hard-hit state of Florida.

“We literally left Zero Gravity on a Wednesday and drove 16 hours to Florida that Friday,” Crane said. “We thought we were going to be gone a week, but we were gone for nine weeks.”

Both women were immediately put to work in overseeing testing sites and establishing mobile hospitals throughout Florida, including stints in Orlando, Fort Lauderdale, Miami, Fort Myers, Palm Springs, Tampa, and Jacksonville, among other cities.

Reusch admitted that, when they first arrived, she was surprised by the seriousness of the situation.

“To me, that was extremely scary walking in our very first day into this mobile hospital and you see all of these people in hazmat suits and you have no idea what’s going on,” she said. “It literally looks like you’re walking into this crazy crisis situation.”

The women also made rounds in testing residents and educating staff at nursing homes, which Reusch and Crane said were “flooded” with the virus.

“The very first long-term care facility site that we went to, the staff had taken nine deceased out in one day,” Crane said. “So that was shocking for us. I admit I didn’t really worry about contracting the virus so much personally, but it was 100% very worrisome for the elderly population.”

Still, the ladies admitted that their own safety did creep into the back of their minds occasionally.

“Our nurses were getting it,” Reusch said. “So nurses were having to be quarantined and stuck in their hotel rooms literally not allowed to leave. Everybody ended up recovering fine, and a lot of them didn’t have symptoms. But there were a few that we were afraid we’d have to take them to the hospital. One nurse was really sick. She was young and had no prior health issues but still became very ill.”

Luckily, that young nurse’s health slowly began to improve, but Reusch and Crane said quite a few nurses were apprehensive amid the chaos of the situation.

“There were a lot of nurses who said, ‘I didn’t sign up for this. I’m not comfortable taking care of that patient,'” Reusch explained. “And Jenn and I just said, ‘We’ll do it. We have the proper PPE (personal protective equipment). We’re here. We’re not going to NOT take care of these patients.'”

With so much attention being focused on the acts of medical personnel, Crane and Reusch were quick to point out another group of people who are receiving a lot less recognition.

“You’re with the National Guard, so the nurses worked very closely with the military,” Crane said. “We both said the people not getting enough credit were the military. They protect the nurses. They’re on every single mission we go on. They fed us. They tested right alongside of us, and you don’t hear about them as much. They’re just fantastic.”

The nurses reopened Zero Gravity on June 1. But even in returning to some degree of normalcy, Reusch and Crane said it’s hard to turn off their nursing instincts that compel them to keep helping.

“I have different waves of emotion about it,” Reusch explained. “Obviously, our business is open and I want to be here. But, at the same time, there’s still a big part of me that wants to keep doing my part to help.”

Crane summed up the whole experience. “We both had our moments, but overall it was an awesome experience,” she said. “This is why we became nurses, and this was our opportunity to give back. We would do it again, 100%.”

This press release was issued on behalf of the news source, who is solely responsible for its accuracy, by Send2Press Newswire. To view the original story, visit: https://www.send2press.com/wire/kentucky-nurses-join-covid-relief-efforts-in-hard-hit-florida/