LOS ANGELES, Calif. /California Newswire/ — The application of Augmented Reality techniques, immersing fans in multiple elements of their favorite sports, has taken fan engagement to new levels, says AR innovator, INDE. The passive consumption of a matches or games is fading into the past. Today it’s possible to involve spectators in ways that were previously unheard of, and that’s where out-of-the-box marketing tools come into the picture. 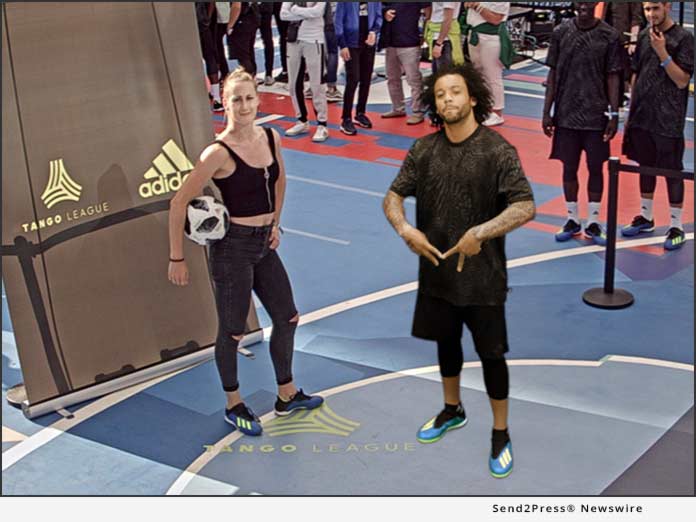 Award-winning company INDE is no stranger to creating unique fan experiences that harness the power of immersive technologies, having already developed and deployed installations for some of the most well-known sports leagues and teams.

In 2018 INDE created an Augmented Reality experience that allowed Adidas Tango League participants to impress (or disappoint!) Brasil and Real Madrid football star Marcelo Vieira with their football tricks. Snapshots of this experience – and the entire performance – was automatically captured by INDE’s AR system, and could be shared instantly on social channels.

INDE’s innovation didn’t stop there. 2019 started with a fan-centric campaign for PizzaHut that allowed NFL fans to meet – and dance – with football stars Antonio Brown and JuJu Smith-Schuster at Super Bowl LIII. The large-screen AR installation was part of the fan-centric campaign that Pizza Hut, the Official Pizza Sponsor” of the NFL, introduced in the lead-up to the new season. The success of this project’s debut led to a roll-out where fans could then meet their idols at the NFL draft too.

For both projects, athletes were captured in a special environment. “INDE’s approach to AR content production is characterised by bringing together techniques that simplify the production and deployment process. Over the past year our BroadcastAR interactive product has been adapted, allowing us to mix green screen capture techniques with a videogame production approach, linking behaviours in the characters that the system displays,” explained Xava Fragoso, INDE’s CDO.

Alex Alanson COO added: “Augmented reality gives fans the ability to interact with their heroes in a way that would otherwise be virtually impossible to deliver. This delivers true fan engagement, which is a key objective of any sponsor and team.”