LOS ANGELES, Calif. /California Newswire/ — Why do some shapes in art increase aggression? Can a sun tattoo create inflammation in the body? What makes black, the most popular color of tattoos and fashion, statistically the worst color to wear for cultivating happiness, attracting love, winning in sports, and achieving success? In his groundbreaking new book, Cary Weldy discusses how the science of art – including the lines, shapes, colors, patterns, and symbology in a single tattoo or art piece on the wall – dramatically changes one’s life experience. 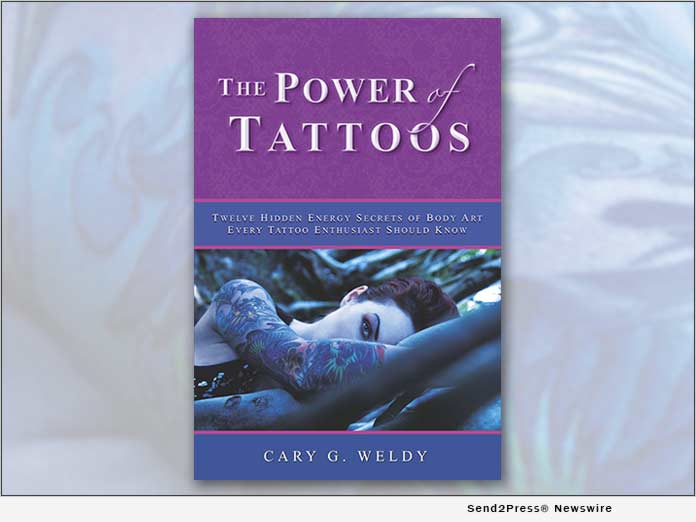 From his energy-based approach to art and interior design to his appearances on HGTV, readers familiar with Cary Weldy will appreciate his new offering, in which he speaks to both the tattooed enthusiast and art aficionado. He launched his second book “The Power of Tattoos: Twelve Hidden Energy Secrets of Body Art Every Tattooed Enthusiast Should Know” in paperback worldwide on Aug. 23, 2020, on Amazon.com. Within three days, the book became a #1 new release on Amazon worldwide, as well as in the top-selling 100 books among 50,000 titles on tattoos and fashion globally.

“While working with clients and their art over the past two decades, I noticed something rather startling,” says Weldy. “Artwork usually reflects the personal stories of our past. But curiously, our art also creates our future. With tattoos, it is even more profound. The longer we are near a piece of art, the more we go into resonance with the energy and information radiating from the colors, shapes, lines, patterns, and symbology in a single image. The time we are exposed to an image matters.”

“In 1889, Oscar Wilde wrote that life imitates art far more than art imitates life,” Weldy explains. “As a trained chemical engineer who believes in science, I wanted to put Wilde’s theory to the test to find out how our art shapes our lives. For six years, I interviewed dozens of inked enthusiasts all over the world and dug into the research about the science of art. It is true that every piece of art we are around affects us, much like being near a friend. Science confirms that when we are around a happy or sad friend, we begin to resonate with his or her energy. After we absorb it, we become it.”

“For example, the most popular color in fashion is black, which is also the top color used to ink tattoos,” Weldy says. “Despite its widespread popularity and belief that black is the ‘power color,’ wearing it has rather devastating consequences. Studies show the color black increases aggression, evokes anxiety and depression, and adversely impacts the immune system. In sports, black is the #1 losing color.”

“In nature, however, most living things are rich in vibrant color, and what little in nature that is black usually has a destructive, deadening quality to it – including mold, tooth decay, many cancers, burned wood, volcanic ash, coal, ants, crows, black bears, skunks, frostbite, and decaying meat,” Weldy adds. “This color is an energetic black hole that absorbs light, heat, and other energy forms. Simply said, black radiates the energy of destruction and death.”

“Red, on the other hand, has been shown to be the winning color, hands down,” Weldy explains. “For centuries, Pranic Feng Shui practitioners have observed that the color red has an expansive quality, versus the contracting quality of black that is much like an energy vampire. Red has been shown to make people more attractive, elevate test scores for students, and give sports teams the winning edge. Since 1946, English football teams have won more games than they lost when wearing red, and another study revealed that between 1940 and 2013, the color of NCAA uniforms for the top-performing teams was rarely black. In fact, the winning teams wore red. Global companies, such as McDonald’s, Target, and Coca-Cola, successfully use red to create a clear advantage in a competitive marketplace.”

* The 12 elements of art that change one’s destiny, including color, shape, symbolism, proximity to an image, length of exposure, quantity of tattoos, and how widely distributed an image is.

* How some shapes promote harmony, positive emotions, and prosperity, while other shapes such as sharp angles found in many tattoos escalate stress, aggression, and other negative emotions, as research confirms. “These studies explain why getting more than three or four tattoos usually results in increased aggression, anxiety, substance abuse, and other health issues,” Weldy says.

Cary Weldy is an experienced interior designer, builder, and accomplished leader in advertising, PR, and branding in Fortune 500 companies. With his education in engineering and extensive studies in dowsing and subtle energy over the past 30 years, he brings rare insight and knowledge in how energy from art, media, and architecture influences people’s lives. In his global consulting practice, Weldy provides practical solutions to individuals and corporate clients to transform the energy in their homes, workplaces, products, and media.

For more than 25 years, Cary Weldy has studied the secrets of the masters of art, architecture, and energy, including Leonardo da Vinci, Michelangelo, Vitruvius, Plato, and the ancient Egyptian temple masters. Since 1991, he has extensively studied energy and healing modalities around the country, with certifications in Polarity Energy work, QiGong, Reconnective Therapy with Herwig and Kerstin Schoen, Advanced Pranic Healing with Master Co, and EFT (Emotional Freedom Technique) with Steve Shields and Kay Phillips.

In 2011, Weldy published his first book entitled “Spiritual Values in the Workplace: The Soul of Success in the 21st Century” with Hay House’s Balboa Press, where he discusses energy in the business environment. In addition to numerous appearances on HGTV, TLC, and other networks, he appears on TV and radio shows, conducts seminars and workshops, and speaks at conferences. In 2012, he created, produced, and hosted a TV show called “Sacred Spaces,” achieving three Accolade awards.

Link to purchase the book: https://amzn.to/2D9lJmS

ShopMyCause Launches in Virginia to Power Investment in Local Communities