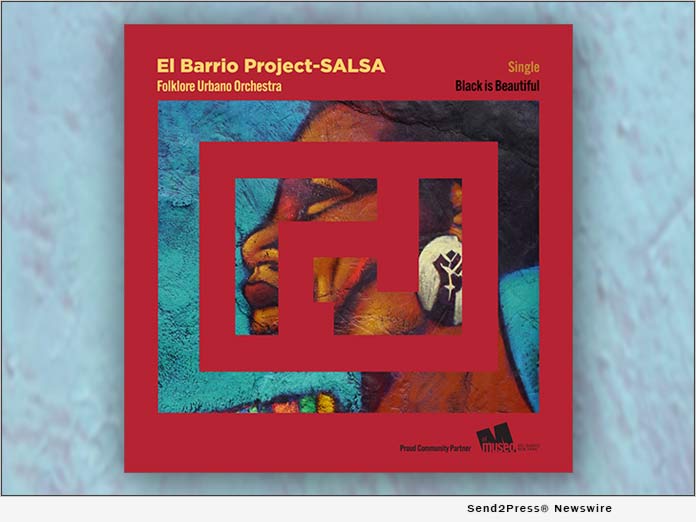 NEW YORK CITY, N.Y., Sep 29, 2020 (SEND2PRESS NEWSWIRE) — During this time of confinement, while much of the artistic community has been greatly impacted, the cultural institution Folklore Urbano NYC has made great strides in crystallizing its mission to create universal and inclusive music and bring joy through the power of the arts. Its motto, #GlobalSalsa, is the premise for this first single “Black is Beautiful,” to be released on September 29 on iTunes and the most important digital platforms.

“El Barrio Project-SALSA,” the fourth production of Folklore Urbano NYC, was born in East Harlem, colloquially called El Barrio, upon the closing of the historic Latin music institute known as Boys and Girls Harbor, where Pablo Mayor was involved as artist and educator for 16 years. It was Pablo’s intention to give homage to the musical legacy of this neighborhood and inspire young people to continue connecting with its musical roots.

“Black is Beautiful,” the preamble to the album, takes the listener into the heart of the historic birthplaces of salsa: Spanish Harlem and the Bronx. It was written by the composer Cruz “Chino” Melao and Pablo Mayor before the events which have recently occurred in the United States.

“When Cruz shared the lyrics with me, I sought out rhythms and sounds which would represent what I have always heard and sensed from El Barrio; and now, by establishing a community partnership with El Museo del Barrio, we put the song in the hands of the community where these sounds and message resonate the most. ‘Black is Beautiful’ connects cultures and continents, conveying a message of unity and dialogue to promote the change that our contemporary society needs,” says the artistic director of Folklore Urbano NYC, pianist Pablo Mayor.

The lyrics of the song underscore a respect for the struggle of Afro-descendants throughout their history and their cultural and artistic contributions to society, and in turn, repudiates those who want to deny them by performing unforgivable racist acts. “Black is Beautiful” is a call for people of all races to come together to celebrate the spiritual and musical beauty of Africans and their descendants. The video choreography was created by the renowned dancer and choreographer Daniel Fetecua; the steps have the double message of enjoying the dance while the hand movements invite us to unite. The video includes people from around the globe, coming together to share this message of unity through music and dance.

The soul of the song is in its lyrics, an invitation to sing together: “Come on board, we’re spreading love! With our love, we have enough to be free! You know black is beautiful.” It speaks not only to Afrodescendents but is a call for unity of people from all races to celebrate the beauty of people of color.

“Black is Beautiful” is performed by the Folklore Urbano Orchestra, featuring Parisian vocalist Laurent Hounsavi, originally from Benin. Laurent achieves with his luminous and versatile voice, the perfect balance between Tchinkoume, a Beninese rhythm from West Africa, and the dynamic Cha-cha-chá, embodying the mission of #GlobalSalsa that Pablo Mayor envisioned for this new album. Laurent Hounsavi sings in English and the West African dialects of Fon and Yoruba, and his presence, along with the rhythm and language of his native Benin, draws a direct line to the continent of Africa that has historically provided the backbone to much of the music of Latin America, including salsa.

“Black is Beautiful” is a collaboration with songwriter and Co-Executive Producer Nick Chavarria, and expresses the vision of Pablo Mayor, the artistic director of Folklore Urbano NYC, in continuing his quest for #GlobalMusicToUnify. Special thanks to its Proud Community Partner, El Museo del Barrio.

Navigating this cultural labyrinth that is New York City, Folklore Urbano NYC has since 2000 been producing, uniting, creating, and educating. Led by Artistic Director Pablo Mayor, the musical production company has been uplifting and inspiring through its renowned ensembles, grassroots programs including Cumbia for Kids and the music festival Encuentro NYC, Pablo Mayor’s compositional work, a collaboration with iD Studio Theater in the South Bronx, and a partnership with dancer/choreographer Daniel Fetecua.

Notable new works include “Unspoken Tales,” a winner of a 2019 Culpeper Arts and Culture grant, supported by the Rockefeller Brothers Fund, and the release of its fourth album El Barrio Project-SALSA.

Folklore Urbano NYC finds continuity in a mission that serves to gather people and artists of all backgrounds, to understand and celebrate cultural origins, and to bring joy through the power of the arts, creating #GlobalMusicToUnify. Follow us on Instagram @GlobalMusicToUnify! FB: @pablomayor https://www.facebook.com/pablo.mayor.370

Born in Cali, Colombia, Pablo Mayor established his musical production company Folklore Urbano NYC in 2000, shortly upon arriving to New York City, with a mission of #GlobalMusicToUnify. Winner of the 2020 Artist Award from ArtsWestchester, Folklore Urbano NYC Artistic Director Pablo Mayor, is first and foremost a creator. His compositions and creative concepts forge new territory in the global landscape of contemporary Latin American music as he expresses the nuance of each culture, he encounters through both his compositions and his piano.

Pablo’s versatility ranges from his latest Folklore Urbano Orchestra creation: “El Barrio Project-SALSA,” to “Unspoken Tales,” a multi-disciplinary work inspired by immigrant stories from around the world, supported by the Culpeper Arts and Culture program of the Rockefeller Brothers Fund. His compositions are featured in Berklee City Music’s Pulse Latino software in rhythms from South America and Mexico, and he has traveled throughout Latin America with Berklee’s educational program making connections between music education and the cultural roots of a country.

He is founder and producer of NYC’s Colombian music festival Encuentro NYC spanning over 16 years. Since 2016, he has been in residence at iD Studio Theater in the South Bronx and continues in his 18th year as resident composer for the company. In addition to his own Folklore Urbano ensembles, Pablo is pianist and the only non-Puerto Rican member of the folkloric Puerto Rican group Los Pleneros de la 21 and was for over 15 years pianist and arranger with the legendary Cuban charanga Orquesta Broadway.

This press release was issued on behalf of the news source, who is solely responsible for its accuracy, by Send2Press Newswire. To view the original story, visit: https://www.send2press.com/wire/folklore-urbano-nyc-launches-black-is-beautiful-the-first-single-off-its-new-album-el-barrio-project-salsa/