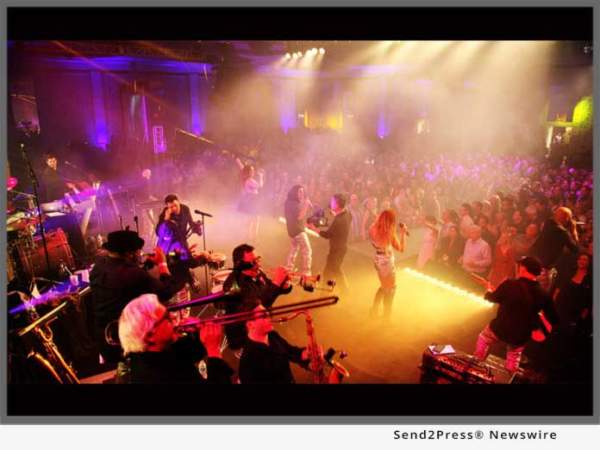 On December 31 at 6 p.m., the ECNYE Pre-Party will begin with a DJ at the Ghost Bar. Beginning at 6:30 pm Emerald City Band will have a VIP pre-concert meet and greet. A three-course dinner will be served while attendees enjoy live entertainment in the Hilton Anatole’s Chantilly Ballroom. Emerald City Band will take the stage at 9 p.m. to usher in the New Year with its high-energy, interactive show playing popular hits from the 60’s, 70’s, 80’s, 90’s, 00’s, as well as current songs from today.

Emerald City Band has been a fixture in the Dallas music scene since 1983. The 13-piece, 3-horn section live party band has entertained at over 5,000 corporate events, over 4,000 weddings, and over 1,000 celebrity events. Emerald City Band has performed for President and Mrs. Bush at The White House, and numerous fortune 500 companies including MCI, Ford Motor Company, Southwest Airlines and American Airlines, and has been featured at many high-profile weddings for clients such as Emmitt Smith, Mark Cuban and Angie Harmon.

The Hilton Anatole is a destination itself. The 4-star hotel boasts the largest hotel art collection in the US with over 1,000 exotic pieces from around the world, along with a full-service health club & spa and a choice of eight restaurants and bars. Complimented by over 600,000 sq. ft. of meeting and event space, this Dallas hotel’s 1,606 beautifully detailed, Asian-inspired guest rooms and suites resonate the Anatole’s amenable comforts and grand style. The hotel’s redesigned Atrium II presents guests with a tranquil reflecting pool overlooked by a massive kinetic sculpture “Nebula”, suspended 50 feet above and specially designed by Reuben Margolin.

This press release was issued on behalf of the news source, who is solely responsible for its accuracy, by Send2Press Newswire. To view the original story, visit: https://www.send2press.com/wire/emerald-city-bands-new-years-eve-party-moves-to-hilton-anatole-in-dallas/