FRESNO, Calif. — Chairman and CEO, Paul Willis stated, “Just like his previous career at a large agribusiness company, Dr. Mark E. Whitacre has risen fast at Cypress Systems, Inc, last month being named the company’s chief operating officer and president of operations.” Now Cypress and Whitacre are focusing their energy on an aggressive cancer prevention campaign in order to get Americans-and people around the world-to consume a special type of selenium known as SelenoExcell(R). SelenoExcell(R) was found in a gold-standard human clinical trial to dramatically reduce colon, prostate, and lung cancers.

Mark Whitacre is the subject of a motion picture to be filmed starting next month, titled, “The Informant,” with box office mega star Matt Damon playing Whitacre. However, Whitacre’s real mission in life and main passion for the future is focused on the role of selenium and SelenoExcell(R) as a cancer prevention agent. Cypress believes that with the anticipated media coverage related to the movie, there will be a window of opportunity to raise public awareness for SelenoExcell(R) and cancer prevention.” 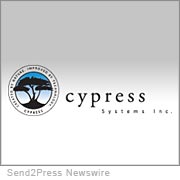 Awarded his Ph.D. at Cornell University, Dr. Whitacre did his research thesis on the biochemical role of selenium at the cellular level. His research was conducted jointly with a world-renowned selenium scientist, Dr. G. F. Combs, Jr. Dr. Whitacre today stated, “Although sadly underutilized, selenium has the potential to have the most profound impact upon dietary cancer prevention of any nutrient we know of today.”

Cancer rates per 100,000 people are about the same as they were 40 years ago! According to the American Cancer Society, 565,650 people are expected to die this year due to cancer in the USA, and 1,437,180 people are expected to have cancer in 2008. “These cancer incidence and death rate due to cancer are unacceptable,” said Dr. Whitacre. He further added, “Selenium acts as an active component of the important enzyme, glutathione peroxidase, which helps combat free radicals. Free radicals are part of the cause of many chronic diseases including cancer. Selenium plays a vital role in our natural defense system.”

So far, no cancer preventive agents have gained FDA approval, save for a qualified claim for selenium. “This is strikingly odd since many cancer experts agree that the diet plays a strong role in cancer prevention”, said Whitacre. But researchers have had a difficult time identifying which nutrients in a healthy diet, other than selenium, actually prevent cancer.

That question was largely answered in 1996 when the late Dr. Larry Clark, of the University of Arizona Cancer Research Center, and Dr. G.F. Combs, Jr., who was Professor at Cornell University at the time (and currently Director of the USDA in Grand Forks, ND), published results from the 10-year Nutritional Prevention of Cancer (NPC) Trial. The NPC Trial which was published in the December, 1996 Journal of the American Medical Association (JAMA), showed Cypress’ SelenoExcell(R) brand selenium, taken as a dietary supplement at 200 micrograms per day, powerfully reduced the risk for many types of cancer (colon, lung and prostate) from 50%-63%.

Since then, Cypress Systems, Inc. has campaigned to promote SelenoExcell(R) as cancer preventive food ingredient. SelenoExcell(R) has met all of the requirements cancer researchers demand – safely proven in randomized, interventional, double blind, placebo-controlled, and long-term human trials. This is the “Gold Standard” of clinical research.

Savvy consumers have been seeking out the SelenoExcell(R) brand of selenium in health stores for over a decade. Today there is the opportunity to fortify foods using the same ingredient that was used in the 10-year study. SelenoExcell, selenium bound to an array of amino acids-such as cysteine and methionine – that form proteins, can be incorporated into bread, beverages, and other healthy foods. “Many types of selenium used in dietary supplements are unbound, inorganic, and are not the natural food form of selenium,” said Mark Whitacre. “The biological availability of selenium is higher in organically-bound selenium,” Whitacre added.

“We at Cypress Systems are placing our full energy behind taking this remarkable cancer prevention research to add this nutrient into normal diets. Our passion and our mission is to use this simple, safe, and inexpensive nutrient to lower cancer risk and prevent a horrible disease that has touched too many Americans’ lives,” said Whitacre.