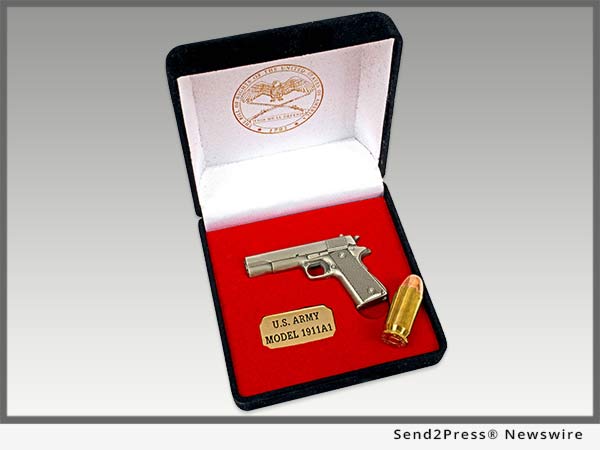 ROME, Ga., May 02, 2017 (SEND2PRESS NEWSWIRE) — Hampton & Weaver, a small firm in historic Rome, Georgia has begun producing a Collection of “Famous Handguns of the World” in one-quarter scale. These mini-replicas vary from 1 1/2-inches to 3 3/4-inches in length, are cast from zinc, electroplated with silver and an antiqued finish is applied to accentuate the features of each miniature. Every model is simply exquisite, with aesthetic detail ingrained into each creation.

Each of the mini-replicas is shown with a detailed description and condensed history on the company’s website. Currently, there are three mini-replicas shown, with a fourth in the process of being created.

The first mini-replica is the renowned 1911A1 Semi-Automatic Pistol, that icon of the ages. Second is the Colt Single Action Army Revolver, while the third is the historic P.08 Luger. The fourth – in the works now – is the C96 “Broomhandle” Mauser.

The list of the 12 handgun replicas in the Collection are ranked in order of nostalgia and notoriety. The C96 Mauser is followed by the Webley Mark VI, the Colt Walker .44, Colt Python, Hi-Power, Auto Mag, S&W J-Frame, Beretta 92 and Glock.

“The condensed histories of each replica on the website contain some very interesting facts. The 1911A1 was actually also manufactured by the Nazis in WWII!” says Frank Hindman, founder and president of Hampton & Weaver.

The SAA was first issued to General Custer’s 7th Cavalry, but is more recognized as Marshall Dillon’s quick-draw revolver on the “Gunsmoke” TV series.

The Luger, mostly associated with the German army in WWI and WWII, is also known as the Pistole Parabellum 1908. The Parabellum means, ironically, “If you want peace, prepare for war.” The C96 Mauser is nicknamed the “Broomhandle” because its grip closely resembles a real broom handle.

Roy Huntington, Editor and Publisher of American Handgunner magazine, was instrumental in helping compile the list of the 12 Most Famous Handguns of the World and, upon receiving one of the first 1911A1 production replicas, he described it in the magazine as, “The best I have ever seen!”

The mini-replica line is produced by a small company named Hampton & Weaver. It was started in 1968 by Frank W. Hindman II and manufactured a range of products including mascot pins for high schools, fishing jigs and over a million designer belt buckles. He made the first 1911A1 mini-replica over 25 years ago, but it was one-half scale and retailed for $179, far out of the price range for most Americans. Only a few were made.

With new manufacturing technology, experience and expertise, the new one-quarter scale mini-replicas retail for only $19.95 with the exception of the Colt Walker .44 which, due to its size, 3 3/4-inches in length, will retail for $24.95.

The initial list of the 12 most famous handguns may be extended to 16 or, possibly, more. Even an 8-inch long military version of the Thompson Sub-Machine Gun is under consideration for later production.

The pricing is very attractive considering the excellent quality of the products.

This is a very unusual product line, with a hint of history included, and a choice of a free patriotic gift with each replica purchased.

The mini-replicas can be viewed and ordered and the company contacted by visiting the website, http://www.firearmsassurefreedom.com/.

This press release was issued on behalf of the news source, who is solely responsible for its accuracy, by Send2Press Newswire. To view the original story, visit: https://www.send2press.com/wire/famous-handguns-of-the-world-collection-in-miniature-now-available/

Champ Kennels: An L.A. Dog Breeder to the Stars with Miniature French Bulldogs