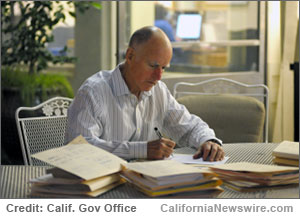 She was founder and managing principal of Sparticles LLC, a planning and development consulting firm from 2008 to 2011, director of planning, building and major projects for the Oakland Base Reuse Authority from 2000 to 2007 and planning and building director for the City of Emeryville from 1995 to 2000. Cappio served as planning director for the City of Albany from 1985 to 1995 and assistant and associate planner for the Town of Corte Madera from 1980 to 1985. This position requires Senate confirmation and the compensation is $157,707. Cappio is a Democrat.

David Beier, 65, of San Francisco, has been appointed to the Milton Marks “Little Hoover” Commission on California State Government Organization and Economy. He has been managing director of Bay City Capital since 2013. Beier was senior vice president for global government affairs, communications and philanthropy at Amgen Inc. from 2003 to 2013 and partner at Hogan and Hartson from 2001 to 2003. He was chief domestic policy advisor in the Office of U.S. Vice President Al Gore from 1998 to 2000, vice president of government affairs and public policy at Genentech Inc. from 1989 to 1998 and counsel for the U.S. House Committee on the Judiciary from 1979 to 1989. Beier is a member of the Constitution Project Board of Directors. He earned a Juris Doctor degree from Albany Law School. This position does not require Senate confirmation and there is no compensation. Beier is a Democrat.

Scott Budnick, 37, of Los Angeles, has been appointed to the California Community College Board of Governors. Budnick was executive vice president of production and film producer at Green Hat Films from 1999 to 2013. He is founder of The Anti-Recidivism Coalition and a member of the California Board of State and Community Corrections. Budnick is a teacher and advisory board member for InsideOUT Writers. He is a member of the Los Angeles Conservation Corps Board of Directors and the Loyola Law School Center for Juvenile Law and Policy Advisory Board. This position requires Senate confirmation and the compensation is $100 per diem. Budnick is a Democrat.

Christopher Christophersen Sr., 54, of Tracy, has been appointed to the California Apprenticeship Council. Christophersen has been business manager at the International Union of Painters and Allied Trades District Council 16 Northern California since 2002. He was president of the Auto, Marine and Specialty Painters Local 1176 from 1998 to 2002 and an apprentice-journeyman at Forman Automotive Painter from 1980 to 1998. This position does not require Senate confirmation and the compensation is $100 per diem. Christophersen is a Democrat.

Cynthia Pollard, 55, of Bakersfield, has been appointed to the California Secure Choice Retirement Savings Investment Board. She has been president and chief executive officer of the Greater Bakersfield Chamber of Commerce since 2012. She held several positions at the Pacific Gas and Electric Company from 2009 to 2012, including manager of local government relations and manager of media relations. She was president of Cynthia Pollard Communications Inc. from 1993 to 2009 and served in several positions at Bakersfield College from 1986 to 1993, including director of public information and publications and business management instructor. Pollard was a professional development specialist at Kaiser Permanente Southern California from 1984 to 1986, professional employment specialist and training and development representative at Walt Disney Productions Studio and Disneyland from 1980 to 1984 and television field reporter at the Disney Channel in 1983. She is a member of the U.S. Chamber of Commerce Public Affairs Council, the Mid State Development Corporation Board of Directors and the Rotary Club of Bakersfield Downtown. Pollard earned a Master of Arts degree from the University of La Verne. This position does not require Senate confirmation and there is no compensation. Pollard is a Democrat.