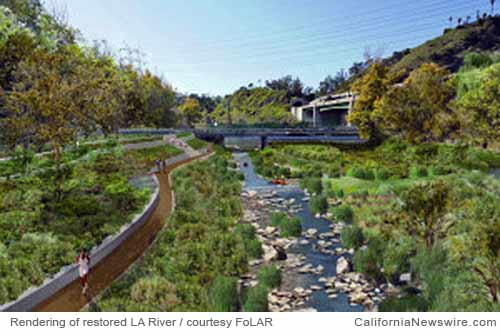 “The River reaches across communities and issues. Today voters demonstrated their support of the River at the polls,” said FoLAR Sr Policy Director Marissa Christiansen. “We’re so thankful to the community for supporting our campaign for A, M and HHH, and we are excited to be a part of the bright future this victory promises.”

FoLAR is committed to restoring and protecting the Los Angeles River and creating an environment “swimmable, fishable, boatable and bikeable” for all Angelenos. Los Angeles County Measures A and M and Los Angeles City Proposition HHH make significant contributions to that mission.

Measure M will provide critical funding necessary to complete the full LA River Bike path closing large gaps in the current system. In a video message Los Angeles Mayor Eric Garcetti recognized the importance of Measure M for the River saying “Measure M will be critical for the Los Angeles River to finish the bike path – fifty one miles through fifteen cities – all the way to the ocean.”

“Measure M’s passage will connect diverse communities across the County by completing the full LA River Bike Path,” said Christensen. “We’re also thrilled that the improved transit network will empower more people to visit the River.” and see it as a crucial part of their more connected communities.

“As much as 57% of LA River homeless live in or near the LA River.” said Christiansen. “The homelessness crisis is an LA River issue and the passage of Prop HHH is a major victory.” Los Angeles City Proposition HHH will reduce homelessness by funding permanent and supportive housing to those in need.

“We’ve been fighting for the River for 30 years – it feels good to win at the ballot box!” said FoLAR Founder and President Lewis MacAdams. FoLAR believes that these electoral victories will pave the way to future victories and activism on the LA River. MacAdams continued, “This is a new era for the LA River. I’m proud of our team, proud of the LA River Community and most of all proud of what we accomplish together.”

FoLAR is a 501(c) 3 non-profit organization founded in 1986, whose mission is to protect and restore the natural and historic heritage of the Los Angeles River and its riparian habitat through inclusive planning, education and wise stewardship.