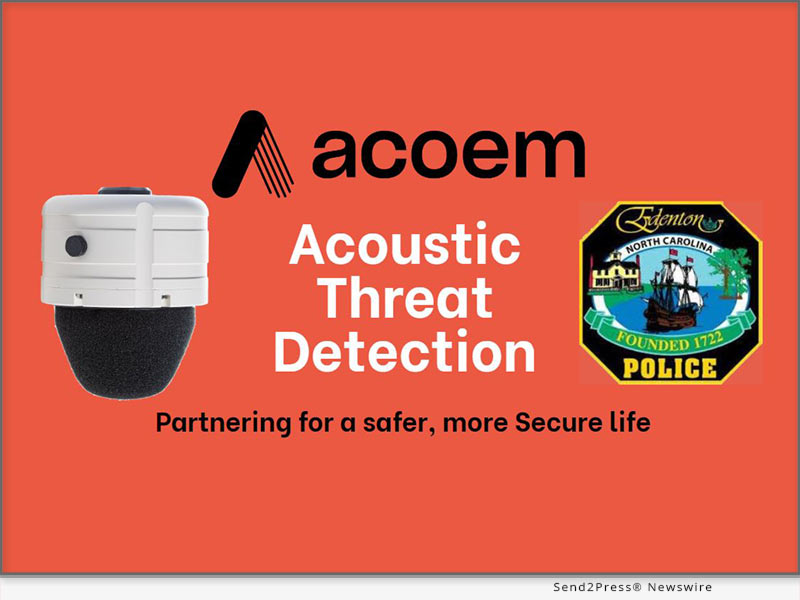 This results in a faster, more accurate response to the scene to better recover evidence, interview witnesses and tend to gunshot victims.

Edenton, N.C. was one of the first communities in the state to use this ATD. The town installed 15 ATD sensors during the summer of 2021. With Acoem’s technology able to localize a threat with one sensor, the scalability allowed this small town the opportunity to have big-city technology on a lower budget.

To date, its success in the public arena has been unmatched. In its first year of deployment, the Acoem ATD system detected 100 percent of the gunshots within its detection range with video evidence of a vehicle in a drive-by shooting. Most recently, on October 31, 2022, an Acoem sensor detected and alerted that multiple shots were fired in Edenton. Video evidence helped to identify and consequently arrest two shooters within 24 hours.

“We’re committed to creating a community that allows its citizens to feel safe so that they can go about their lives,” Henry King, Chief of Police, Town of Edenton, N.C., says. “Acoem’s ATD is one part of our overall community-first policing plan and having technology like this in our tool belt keeps us one step ahead of criminals.”

Acoem ATD systems are built to fit the end users’ needs and work with their existing VMS, dispatch and other alerting software in use. With Acoem ATD systems, there’s no intermediary. The end user controls their program.

“It was simple to integrate into our existing camera system and gives us the control we need to get alerts immediately,” King adds.

ATD can be mounted just about anywhere. Walls and light poles are common examples, but they can adapt to any location due to their flexible mounting capabilities.

“Gunshot detection is not a new technology in the security market, but with Acoem being one of the original innovators of gunshot detection over three decades ago, our ATD sensor has a big advantage over competitors,” Mike Arnold, sales manager for Acoem, says.

Acoem’s technology is paired with a PTZ camera to not only provide an alert, location and audio, but also to give first responders a look at what is happening at the scene by moving the camera in the direction of the threat as it’s detected.

“That situational awareness can be a force multiplier in an active situation,” Arnold says. “Along with our AI, scalability and giving the end user ownership and control over their system, Acoem can be a game changer for our communities, schools and in everyday life.”

As a leading manufacturer of advanced public security systems, Acoem is committed to securing safer communities through smarter security. Community partnerships fuel its mission, and its revolutionary AI-powered technology is the first of its kind to give security systems the power of both sight and sound. With no system minimums, it’s ideal for use on corporate campuses, schools, industry, churches, public venues, cities and more. Learn more: https://acoematd.com/.

This press release was issued on behalf of the news source, who is solely responsible for its accuracy, by Send2Press Newswire. To view the original story, visit: https://www.send2press.com/wire/acoems-acoustic-threat-detection-technology-helps-detect-gunshots-and-assists-in-multiple-arrests-of-shooters-in-edenton-north-carolina/