HOUSTON, Texas — Rubbing shoulders with Hollywood’s elite is nothing new for the internet’s premier online jewelry retailer WhitefFlash.com. This past weekend at the zany and fun Teen Choice 2008, WhiteFlash flexed their power and shouted their message of youth “AWEARness” as one of the featured sponsors in the highly exclusive Mattel “Celebrity Retreat” during the Awards at the Gibson Amphitheatre – Universal Studios, Hollywood, CA.

The Retreat was produced by Backstage Creations, specialists in award show gifts and custom backstage Celebrity Retreats. Teen Choice 2008, which aired on August 4th at 8PM/7PM CST on FOX, was a huge hit with the young Hollywood elite. 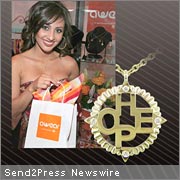 The fun escalated once the stars hit the coveted Mattel “Celebrity Retreat,” chalk full of luxurious giveaways and goodies. WhiteFlash.com sparkled under the tent as they showcased their new AWEAR: Jewelry for Conscious Kids collection. The Collection was developed to inspire youth on a global front by supporting efforts to provide educational opportunities and build stability for those children who have been victimized by the illicit trade of conflict-diamonds throughout the world. Amazingly, which grab the attention of celebs and VIP’s, 25% of all profits from the new Collection goes to support the healthcare and educational development of child victims of conflict diamonds in effected countries.

The young ladies of Hollywood flocked in droves to get their hands on a little something to prove that they too were conscious and AWEAR. Celebrities walking away with goodies from the new line included: popular singers like Jordin Sparks, Natasha Bedingfield, The Cheetah Girls, The Clique Girls, Danity Kane and rapper Lil Mama. Other lucky ladies that can now consider themselves AWEAR are actresses Sophia Bush, Megan Park, Brenda Song, Kaycee Stroh, Oleysa Rulin, Francia Raisa, Niecy Nash and India Eisley.

Rapper and mogul LL Cool J demonstrated that even the fellas think it’s cool to be “AWEAR” as he shopped for gifts for his daughter at the WhiteFlash.com booth and commented that the new line was “tight.” Other guys joining in the shopping for the ladies in their lives included: producer extraordinaire and American Idol judge Randy Jackson; R&B sensation Chris Brown; fashion icon Steven Cojocaru and Hannah Montana star Mitchel Musso.

Sold exclusively at WhiteFlash.com, the AWEAR line of trendy and classic diamond encrusted charms retail from $250 to $1,500, making them ideal gifts for a birthday, graduation, Bat Mitzvah, first communion, confirmation or any other meaningful occasion when a child first learns that the future belongs to her… and that you hope she’ll take care of it. No celebrity endorsement claimed or implied.