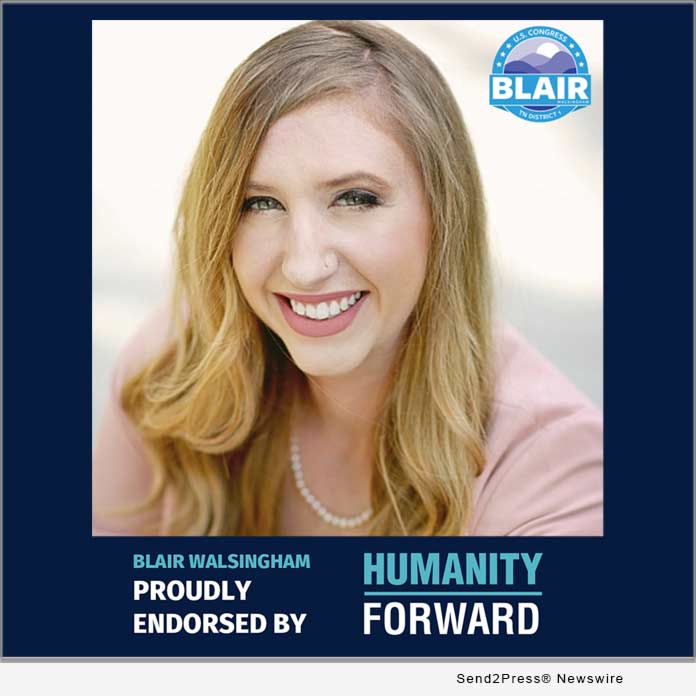 “Blair volunteered for my campaign and is now running for Congress,” says Yang. “She is well-positioned to win her primary.” He adds, “Blair is just the kind of person we need in Washington, a true fighter for the people who doesn’t owe the big companies a thing.”

Walsingham’s platform leads with Universal Basic Income which she says will root out poverty and offer the opportunity for Americans to invest in themselves through education and entrepreneurship. COVID-19 demonstrated how many Americans were ill-equipped to confront the challenges of job loss and unforeseen medical expenses. Walsingham and Yang contend that basic income will ensure life-long financial stability and opportunity. “Passing basic income is a critical safety measure. It’s planning ahead for the rainy days you know will come,” Walsingham explains.

In his endorsement Yang states, “Blair is fighting passionately for rural Americans. There is a need for medical services, internet access, and educational opportunities in her community. People in Tennessee relate to Blair because she just wants better for families.”

Walsingham says, “Despite living in the richest country in the world, millions of Americans still can’t cover their basic needs.” She emphasizes that basic income is not just an economic policy, but also a social policy. She says, “where Universal Basic Income programs have been tried, they have been shown to improve mental health, reduce crime and abortion rates, all while encouraging economic activity. The Eastern Band of Cherokee has been providing basic income from the revenue of its casino since 1996. During this time, the rate of employment has remained steady, and a long-term study indicated a reduction in both crime and suicide rates.”

Yang’s campaign attracted a large number of libertarian and conservative supporters who see basic income as a tool to reduce bureaucracy and provide greater individual freedom. Advocates contend that federal assistance has been distributed to every industry across the board, but rarely has it gone to where it’s needed the most — into the hands of hard working Americans.

The Tennessee Democratic Primary will take place on August 6.

Paid for by Blair For Congress

This press release was issued on behalf of the news source, who is solely responsible for its accuracy, by Send2Press Newswire. To view the original story, visit: https://www.send2press.com/wire/walsingham-and-yang-team-up-to-promote-basic-income-in-tennessee/