HOLLYWOOD — “Hi y’all, we a blues band!” And a profound silence fell over the room. Lead singer Sugaray of Aunt Kizzy’z Boyz said, “I’m gonna say that again ’cause the room always gets real quiet – we a blues band!” But within one minute of launching into their set, the entire audience was up and dancing, and AKB went on to crush the competition with charisma, musicianship and fantastic tunes. Winning the LAMN Jam Grand Slam Urban Artist of the Year title by a landslide, AKB beat out hundreds of competitors.

AKB got these remarks from top-tier talent judges: “I’m an Aunt Kizzy’z Girl now!” “You guys are on your way to something big.” “Unbelievable! I was blown away from beginning to end. I could listen to you play for hours!” “You should be on stage with Taj Mahal at the Long Beach Blues Festival.” “Wow!” “Dope, hot and sexy! I’d love to see you guys live again.” 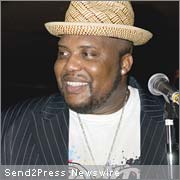 One judge (Violet Brown) even awarded the band an unprecedented perfect “10” score!

The band’s most valuable ingredient is that the band’s dynamic frontman Sugaray knows how to read and work a room. While most artists simply perform, exceptional artists are responsive to the mood of the crowd. The energy shifted when AKB took the stage, and they had the crowd on its feet within seconds.

AKB wins a prize package (valued at over $6,000) with practical tools a band can use to launch its career. This includes the option to sign winning songs to Red Queen Music for commercial exploitation in film and TV; personal consultation in performance, songwriting, marketing and business plan development; a national press release distribution package and eMediaKit(TM) from Send2Press(R) Newswire; a professional photo session, resources, gear, and much more. For hard-working artists with talent and ambition like AKB, these tools will speed them on their way.

Kmiec, who is constantly on the prowl for new music for the 65+ games a year Electronic Arts releases (many of which sell millions of units), was floored by AKB’s performance. He declared, “Get ready because next year [Madden’s] gonna be an all blues soundtrack!”

The crowd roared its approval.

As a direct result of winning the LAMN Jam preliminary round in June, AKB signed a deal with RBC Records, increased their visibility on MySpace by over 50% and have six original songs currently being considered for placement in two major motion pictures. AKB performs 200 – 300 shows a year around the country.

Says RBC Records partner Brian Shafton, a talent judge who signed the band on the spot when he first heard them two months ago, “Nothing speaks louder than Aunt Kizzy’z Boyz’ music. In our eight years of existence, RBC has never signed a group based on one listen until we heard AKB. And it only took two songs! We are not alone in our opinion as everyone who hears the group falls in love immediately. Above and beyond their musical talents, the guys are incredibly hard working and gig over 200 nights per year. Although blues is not the most commercially viable genre, we believe that with the right talent and music we can traverse this stereotype, and we know we have this.”

Violet Brown had great advice for performers to test market their music. “It’s important to take your songs and play them for kids around the neighborhood and at school, where people don’t know you’re connected to the music, and watch their reaction,” she said. “If you know a DJ in a club, take it to him, let him play it. Watch people on dance floor and see how it moves them. See what they have to say.”

More importantly, she generously offered each performer space in her stores, saying “I believe that there is sales potential for all of you. If you put out CDs you should come to me and I’ll put them in my stores, I have about 700 stores across the country. I’m not saying you’ll go in all 700, but there is a spot for everyone. So for all of you here, I recommend that you get with me when your release comes out and I’ll take care of you in that manner.”

As a result of their first LAMN Jam performance in June, Jackie Boyz are currently featured on Diddy.com (“Making The Band” spoof) and are co-writing with Jo-Jo and on Mario’s next album (whose single “Let Me Love You” was a smash hit). Their single “Topless” is among the most requested songs on 97.3-FM in Canada, and they secured a retail and digital distribution deal in Japan.

Arash is now writing and producing music with Angel Diva Music’s Jan Linder-Koda, has booked a two-week Southern California tour and is featured as a DJ on “The Ex List” on CBS.

Due to an overwhelming number of entries, LAMN will schedule another LAMN Jam Contest in 2009. Subscribe free to receive bulletins at www.lamn.com or call 818-769-6095 now to be kept up-to-date.

We Love Our Sponsors