LOS ANGELES, Calif. /California Newswire/ — Uproar Entertainment is excited to announce the release of “Orally Challenged” by Jen Murphy. Recorded in front of a live audience at The Comedy Underground in Seattle Washington this CD showcases Jen Murphy – who fearlessly goes where few female comics have gone before. This pretty, petite firecracker is known for her infectious laugh, her brash style of humor, and for fearlessly addressing topics that most female comics tend to avoid. Jen Murphy fully embraces her gender’s overall insanity, and finds the funny in her traditionally male dominated, x-rated subject matter. 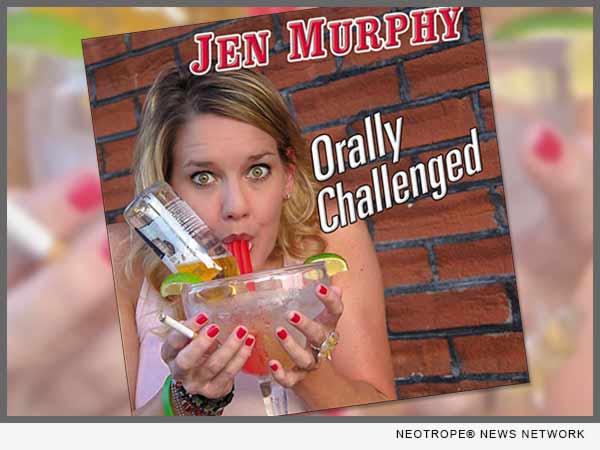 Fellow comedian Alex Hooper says, “Jen is a true comedian. There is something about her style that is immediately compelling and always leaves you wanting more. She is honest, sweet and able to annihilate any room.”

Stand-Up Comedy was not Jen Murphy’s first choice for a career. After graduating high school, she attended The American Academy of Dramatic Arts in Pasadena, Calif., and at 21 made the trek to New York City, determined to become a dramatic Broadway actress. Jen spent years waitressing and performing in Off, Off Broadway stage productions, all the while ignoring countless acting teachers who couldn’t help but laugh every time she tried to be dramatic.

Eventually, no longer able to ignore the laughter, she gave up on drama and heeded their advice. She began honing her comedic chops with Second City Improv. While there she formed an Improv and Sketch Comedy group with her classmates, and began performing all over NYC. It wasn’t long before she went one step further and ventured onto the stand-up comedy stage. After 13 years as a waitress, Jen permanently traded in her apron for a microphone. Now she travels the world bringing her snort inducing giggles to the masses.

Jen is at home on stage, and has headlined in clubs throughout Las Vegas and Southern California. This sharp-witted comic has also been seen on ABC’s Comics Unleashed w/Byron Allen, Last Comic Standing on NBC, her own half hour special on TLC called This Is Why You’re Still Single, LAUGHS TV on FOX, and the comedic film “DUMBBELLS,” released in January 2014. Jen has also had the honor of performing overseas for our troops in Afghanistan, Egypt, Jordan, Kuwait and Greece with Armed Forces Entertainment.

“Orally Challenged” by Jen Murphy is available on iTunes at
https://itunes.apple.com/us/album/orally-challenged/id1137247796