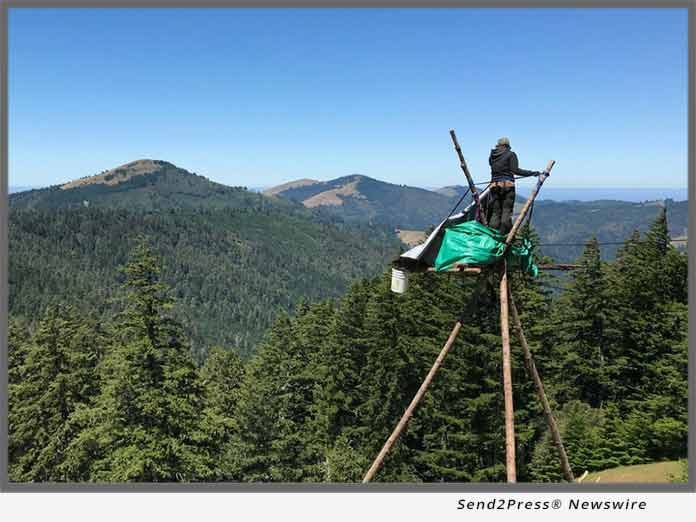 With tasers drawn the guards forcibly restrained two non-resisting protesters who had refused a request to leave, placing them under citizens arrest and confiscating personal equipment including solar panels and a camera.

The guards contacted the Humboldt County Sheriff’s Dept., which arrived on the scene about 8 a.m. and took custody of the arrestees, who were later booked and released with pending court dates. At this writing the road blockade remains in place.

At issue is about 1,100 acres of primary, or ancient, forest consisting of Douglas-fir and diverse hardwoods, as well as natural coastal prairies. The area is vital habitat for listed species including but not limited to the Pacific fisher, pine marten, Northern spotted owl, Northern Goshawk, Golden eagle, Coho salmon, Sonoma tree vole, and the rare fungus agarikon (Fomitopsis officinalis).

Logging of these forests along Rainbow Ridge could take place under two currently approved Timber Harvesting Plans. Opponents of the plans have raised objections about the validity of at least one of these plans, as well as calling into question the “green” certification accorded to HRC by the Forest Stewardship Council (FSC). Not only is HRC logging virgin forest on its lands, but also is poisoning hardwoods through the use of a highly controversial practice known as “hack and squirt.” Such practices should disqualify any timber company from FSC certification, critics say.

Rainbow Ridge is run by San Francisco’s Sansome Partners, of which the Fisher family (best known for its GAP clothing) are major investors.

On the other side of the fight are citizens groups including the Lost Coast League (LCL), which has undertaken conservation projects in the area since the 1970s. LCL has sought from HRC to permanently protect Rainbow Ridge, outright purchase being one option, but thus far the company has refused.

Rainbow Ridge is bordered to the east by Humboldt Redwoods State Park, home of the Rockefeller Grove, at 9,000 acres the largest contiguous virgin redwood forest remaining in the world. To the west lies the King Range National Conservation Area.

Preservation of Rainbow Ridge would thus safeguard a corridor between the two neighboring areas, providing enormous conservation values in an age of species decline and global warming.

Forests Forever was founded in 1989 during the historic campaign to save the Headwaters ancient redwood forest in Humboldt County, California.

For almost 30 years we have been rallying Calif. in defense of the state’s 17 million acres of woodland ecosystems and watersheds. Forests Forever is a 501(c)(4) nonprofit organization. Our Federal Employer ID Number is 68-0201338. Our website is http://www.forestsforever.org.