HOLLYWOOD, Calif. — How is great music created and produced? What do top music producers look for in an artist? How do you find, develop and keep artist clients? And how do producers handle challenges such as creative control? The answers can be found at the PRODUCING HIT SONG 5-part series, sponsored by the National Association of Record Industry Professionals, to launch on February 16th in Hollywood with special guests Harvey Mason, Jr. and Damon Thomas AKA The Underdogs whose production of the “Dreamgirls” soundtrack has them in demand.

The series will feature top producers who will discuss creating and producing great music, how to find and keep artist clients, artist development, beyond technical savvy, the future of music, how to succeed as a producer and/or as a producer-owned label, and getting connected. 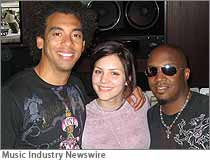 Producers have always been key to musical success, but never more so than today. Commanding top salaries and no longer in the background while artists take the bows, producers are increasingly becoming celebrities in their own right.

The rise of producer-as-star (Randy Jackson, Timbaland and Danger Mouse) has raised the profile of this once behind-the-scenes job, so it’s no wonder that audio engineering schools are turning out graduates in large numbers.

ABOUT THE UNDERDOGS
The Underdogs’ production of the Dreamgirls soundtrack received acclaim from critics and fans, culminating in a Golden Globe win for Jennifer Hudson on January 15. The Underdogs are preparing for their reunion with Hudson for her solo album. The duo has also produced hits for American Idols Kelly Clarkson, Ruben Studdard and Fantasia. Another Idol scheduled to work with The Underdogs is Katherine McPhee for her upcoming album.

PROGRAM DETAILS
NARIP’s “Producing Hit Songs” series will take place Friday afternoons from 3:00 to 6:00 p.m. at the School of Audio Engineering located at 6565 Sunset Boulevard in Hollywood on Feb 16 (The Underdogs), Mar 16 (Desmond Child), Apr 20, May 18 and Jun 15.

ABOUT NARIP
NARIP promotes education, career advancement and goodwill among record executives. Based in Los Angeles with chapters in New York, London, Las Vegas, San Francisco and Phoenix, NARIP offers professional development opportunities, educational programs and seminars with top executives, the opportunity to meet and interact with peers, a job bank, a member resume database for employers, a mentor network, a newsletter and other services.