SACRAMENTO, Calif. /California Newswire/ — According to Smart Cities Prevail, three recent polls conducted in California show broad support for prevailing wage policies on both the state and local level. Prevailing wages help create a stable middle class in local communities, strengthening neighborhoods and allowing people to invest in their towns – but they are frequently opposed by out of town special interest groups looking to profit at taxpayer expense. 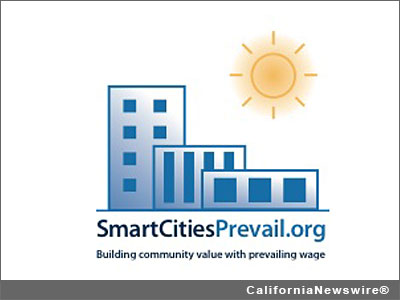 “Three separate polls over the course of five weeks have confirmed that Californians overwhelmingly support prevailing wage policies,” said Dale Howard, spokesman for Smart Cities Prevail. “This is great news for middle class California families, taxpayers, and our economy because prevailing wage jobs put local people to work, reduce the drain on our social safety net, and produce more local economic activity. The public also understands that when you hire highly-trained people and pay them fairly, they will produce high quality buildings, roads and bridges that save the community money in the long run.”

A poll conducted among 802 voters living in general law cities statewide revealed that 44 percent of respondents supported prevailing wage ( http://smartcitiesprevail.org/ ), with 24 percent opposing the policy. The poll, which was conducted by Goodwin Simon and commissioned by Smart Cities Prevail, fielded July 14-18 and had a margin for error of +/-3.5 percent.

In San Diego, where the City Council expanded the number of projects paying prevailing wage on July 30, two polls were conducted that showed similar support.

One poll, conducted by Probolsky Research ( PDF: http://www.probolskyresearch.com/wp-content/uploads/2013/07/SDMetro-Probolsky-Research-San-Diego-Voter-Survey-Report-on-Results.pdf ) for SD Metro, found support for prevailing wage at 43.5 percent compared to 33.8 percent who were opposed to the San Diego policy. The poll was conducted well before the council vote on prevailing wage – from June 28-July 1 – with a sample size of 400 and a margin for error of +/-5 percent.

After the council approval of the new prevailing wage policy, another poll was conducted by Survey USA ( http://www.surveyusa.com/client/PollReport.aspx?g=8e6e3482-9cd3-4fef-9125-72db3adbc2eb ) for the San Diego Union Tribune and KGTV among 600 adults in San Diego and showed support for the policy at 55 percent with 31 percent opposed. The poll had a margin for error of +/-4.1 percent and was conducted August 2-August 4.

In two of the three polls, a plurality of Republicans joined Democrats and Independents in supporting the policy.

Howard continued, “While Americans don’t seem to agree on much these days, it is heartening to see a growing, bi-partisan consensus around the cause of rebuilding the middle class.”

Prevailing wage was first established on the federal level by the Davis-Bacon Act – named for its sponsors, Republican Senators James Davis and Robert Bacon. Today, it enjoys the support of people as diverse as Republicans Paul Ryan and Rick Santorum to Democrats like Bill Clinton and President Obama.

Editorial note: Content based on press release as provided by Smart Cities Prevail, who is solely responsible for accuracy of content.