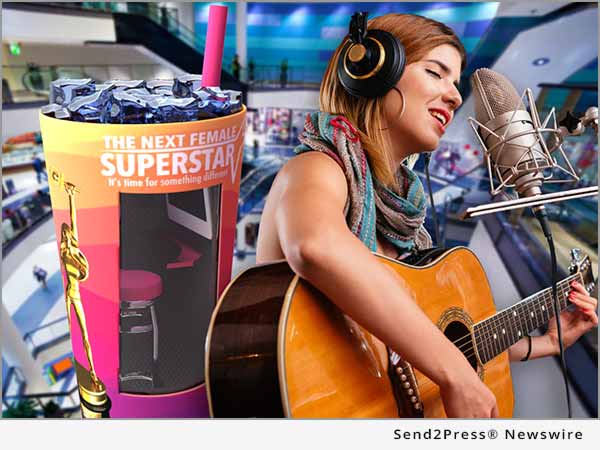 LAS VEGAS, Nev., Nov 01, 2016 (SEND2PRESS NEWSWIRE) — The Next Female Superstar Series Corporation (TNFSSC) has green-lit “The Next Female Superstar(R),” an all-female reality singing competition series that focuses on digital artists’ audition video uploads and live-streaming auditions which stream from TNFSSC’s patent-pending Superstar Kiosks(TM) located in one of their local malls.

Title soundtrack for the web series opening segment is written and produced by Charlie Midnight “Every Women is a Superstar” who’s the executive producer of music operations.

“The Next Female Superstar(R)” program gives aspiring unsigned female artists in the USA and abroad the opportunity to be discovered through the Internet by the use of social media as the platform. For the first time ever, a web-based singing competition series is designed to find “The Next Female Superstar(R),” with a format to not only find that next big voice and big female personality but to also offer format elements that have never been used in past competitions to ensure success for the aspiring superstars. Voting on upload or streamed additions, the platform allows viewers, music lovers, friends and family members the capability to vote for their favorite performers throughout the process.

This all-female talent competition adds a few new twists to the traditional singing competition format. Female artists now have the opportunity to audition in two ways: one by auditioning via the company’s Patent-Pending Superstar Kiosk(TM) or by uploading their audition videos through TNFSSC’s web site audition platform.

Female singers can register via TNFS website to audition or receive a pass to take with them to their nearest Superstar Kiosk(TM) location. A promotional and technical team will be at each Kiosk location to assist the contestants with their auditions. Contestants can be from all genres; Rap, Pop, RnB, Country, etc. Additionally, friends, fans and music lovers alike can register to vote for their favorite contestants via the online website platform.

The other Superstar Kiosk(TM) will tour Berlin, Germany, and London, United Kingdom, for one week in each of these two cities as well. Female artists 18-30 can upload an audition video to the platform, get a friend or family member to film your audition using your mobile phone or other video recording equipment make sure to only submit auditions videos that are no more than 2.5 minutes. Tell us about yourself and record that big voice and big personality.

The top 300 female artists receiving the most votes through the audition process will invited to Las Vegas, Nevada, for TNFS showdown. It is here where they will perform in front of yet-to-be announced industry-celebrities judges who will then select the final 10 female artists to compete for the title of “The Next Female Superstar(R).”

The final 10 contestants will then compete weekly in a live elimination web series conducted over 12 weekly episodes. Each week the viewing audience and celebrity panel will vote on these finalists. The ultimate winner of “The Next Female Superstar(R)” finalist competition series will then be awarded a very valuable recording contract. There will be two tours for the winner and one for the nine finalists in the USA and overseas.

The Next Female Superstar Series Corporation brilliantly uses innovative technology and social media to effectively and efficiently audition female artists from four continents as well as make it possible for friends and family members to easily vote for them in the process. The company has worked on this format and technology for the past two years, and its executives are excited to bring to the world the first ever all-female singing competition broadcast entirely over the web.

This press release was issued on behalf of the news source, who is solely responsible for its accuracy, by Send2Press Newswire. To view the original story, visit: https://www.send2press.com/wire/an-all-new-female-singing-reality-competition-has-arrived-on-scene/

A Fresh Start For 2 Female DEVELOPERS