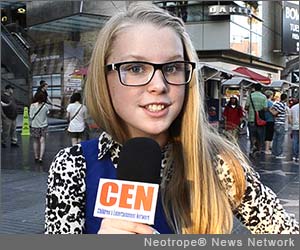 "Our nose-to-the-ground reporters range in age from eight to 18 and they deliver news on what's happening in current events, action sports, movies, music and TV as well as reveal the latest trends in high-tech devices and video games."

In addition to multiple educational and entertainment outlets, CENKids (CENkids.com) features a video of the month; lists the iTunes Top 20 Singles Chart; and gives kids access to cool video games such as Spec Ops and Stunt Dirt Bike 2.

Currently, an interview done by one of CEN's own reporters, Spencer Owens, with Cameron Revier, manager of Arbor Skateboard team, reveals what's behind a $3 million skateboard park in Venice Beach, Calif. The interview talks about the sustainability of skateboarding and shows up close, non-stop skateboard action.

An upcoming event will take CEN's reporters to Theme Park Bonanza at Universal Studios Hollywood. While there, reporters will explore the park and give viewers a behind-the-scenes look into what makes this place one of the hottest attractions in the world. Viewers will also get to experience the special effects stage where they will learn the secrets behind the making of some of the top blockbuster movies.

The CEN cameras will provide a bird's eye view of thrilling rides such as the new Transformers: The Ride-3D, and The Revenge of the Mummy, one of the world's scariest indoor roller coasters.

To view CEN videos on YouTube, visit their page at: http://www.youtube.com/user/cenkids1 .