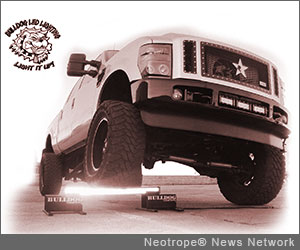 SAN CARLOS, Calif. /California Newswire/ — California businesses cannot claim their products are "Made in the USA" unless 100 percent of the components are manufactured in the country. The federal standard is 75 percent, which places an unfair disadvantage on California firms because there are some products that have components which are not available in the United States. Bulldog Lighting – a Calif.-based firm founded by teenage entrepreneur Dylan Sievers – is spearheading and promoting the passage of legislation that would make the 75 percent federal standard applicable in California.

"California's current 'Made in USA' labeling standard (of 100 percent) is unrealistic for certain companies that make products with many components, some of which are not manufactured in the U.S.," said the 19-year-old Sievers, who hatched the idea for Bulldog Lighting, which makes off road LED light bars for off-road vehicles, while in a business class at Serra High School when he was a 17-year-old senior.

Adopted by freshman Senator Jerry Hill, SB 661 will be discussed in the state senate on May 7. The passage of SB 661 would update California's "Made in USA" labeling standard.

"Since the federal government and the rest of the states use a 75 percent standard. California companies are at an extreme disadvantage. Consumers and companies alike take pride in products that are manufactured in the United States, and it is only fair that businesses in California have a level playing field with competitors in other states," said Sievers.

At 17, Sievers was inspired to develop an off road LED light bar for the team's off-road vehicle when he was competing in a desert off-road race. Off road LED light bars produced by what is now Bulldog Lighting's main competitor were geared for a more affluent customer. "Why not make a high quality LED light bar that is affordable to the majority of off-road enthusiasts?" Sievers asked.

Bulldog Lighting projects in excess of $1 million in its first year of business. The company has three patents that are pending. It has spent the last six months in research and development, and identifying supply sources from U.S. companies to produce its off road LED light bar for off-road vehicles.

Approximately 80 percent of Bulldog Lighting's components derive from American companies, Sievers said. LEDs are not available in the United States, so Bulldog Lighting has no choice but to purchase those outside the country. Bulldog Lighting – which is operated by the Sievers and his parents Lisa and Steve Sievers (who also own an electrical contracting firm) – believes in the importance of "Made in the USA" pride, so the company considered moving production to Texas, where it could use "Made in the USA" on its packaging.

"We decided to remain here (in northern California) because this is home, and we believe it is important to make a difference and help ourselves and every California business by helping pass SB 661 and getting a 'Made in the USA' certification process established," Lisa Sievers said. "There are certification procedures for minority-owned businesses and women-owned businesses (of which Bulldog Lighting is since Lisa Sievers and Sarah Silvestre are company principles).

"Creating a certification process for the 'Made in the USA' claim is critical because consumers deserve to know that companies making that statement actually exceed the 75 percent federal standard," Sievers added. "Some companies make this claim but actually have their products made outside of the country and just assembled in the United States."

Before getting the certification process established, Dylan Sievers is fully focused on helping push the passage of SB 661. Teenage Sievers was astonished at the diminishing number of products that are currently manufactured in the United States, and especially California. Bulldog Lighting contacted Senator Hill, and he introduced the bill. Dylan Sievers is encouraging California residents to contact their local senator and urge them to pass the bill. Reach out to your senator at http://findyourrep.legislature.ca.gov/ .

"We are striving to have every single component for our off road LED light bar from U.S.-based companies, but until items used in our product that are not currently available here actually become available in the U.S., we have no choice but to go outside the country," Sievers said. "Yet we make sure that we use every component that is in our product that is made in the U.S.

"We can prove that we exceed the 75 percent federal standards," Sievers added. "We believe that, first, SB661 should be passed so California companies have the same advantages as businesses in every other state regarding the Made in the USA statement. Then we are devoted to getting the 'Made in the USA" certification process enacted so consumers can have the utmost confidence that they are buying products that meet or exceed the 75 percent federal standards."