PAVILION, N.Y. — Syntec Optics, the largest independent manufacturer of custom plastic optics in North America, has been granted a U.S. patent for its HRDT(TM) (High Refraction Diamond Turning) technology, in production use since late 2005. Most Syntec HRDT projects have been defense-related. However, HRDT holds promise for other markets, such as datacom, that require asymmetric, low-cost optics with high wave sensitivity and strong heat resistance, and share with defense an imperative to shave development cycles.

Rick Arndt, Syntec Optics VP for Tooling and co-developer of HRDT, explains why. “We make precision optics solutions in-house by molding or diamond turning, moving seamlessly from one to the other based on customer needs. While molding is the production standard, diamond turning, which needs no mold, is a natural for rapid prototypes.” 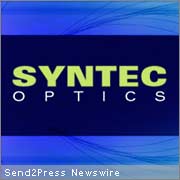 He adds, “Most polymers can be molded or diamond-turned with equal ease. For a few, diamond turning causes imperceptible surface cracks that inhibit optics performance. Prior to HRDT, such polymers included polyetherimides (trade name Ultem) and polyethersulfones, the materials of choice for high wave sensitivity and strong heat resistance. With HRDT, we can diamond turn both of these to optical smoothness every time, 60 angstroms or less.”

Paul Tolley, Syntec Optics VP/General Manager and the other co-developer of HRDT, adds: “The bottom line is HRDT saves projects thousands of dollars in development costs but has even greater value in accelerating time to market. One customer told us HRDT let them develop and test a complex prototype in just three weeks, far less than their best case estimate of 12-16 weeks. As a direct result, they won a multi-million dollar, multi-year contract.”

HRDT is a major Syntec innovation for improving manufacturability. Others of note include proprietary mold development techniques that compensate for shrinkage, reducing molding times by 25-40% and new material uses developed in partnership with key suppliers, such as an Acrylic Copolymer for non-invasive medical applications.

Syntec Optics is the largest independent manufacturer of custom plastic optics in North America – one custom lens or a million. Services are all “in-house” and include design, tooling, production, integrated assembly services and full metrology. With hundreds of completed engagements, customers worldwide can rely on skilled teamwork for high performance, low cost outcomes that push the polymer envelope.