On February 11th, 2018, comedian Nina G will be debuting her one-person show, ‘Stutterer Interrupted:The Making of a Stuttering Stand Up Comedian’ as part of the Solo Sundays performance series at Stage Werx theater.

SAN FRANCISCO, Calif. /California Newswire/ — On February 11th, 2018, comedian Nina G will be at the Stage Werx theater debuting her one-person show, Stutterer Interrupted. The show explores what it’s like to be a stuttering woman in non-stuttering world. How does it feel when people constantly try to finish your sentences? When they ask if you forgot your own name? How do you go from twenty years of hiding your voice to performing on stage every night? These are some of the questions that Nina will address. 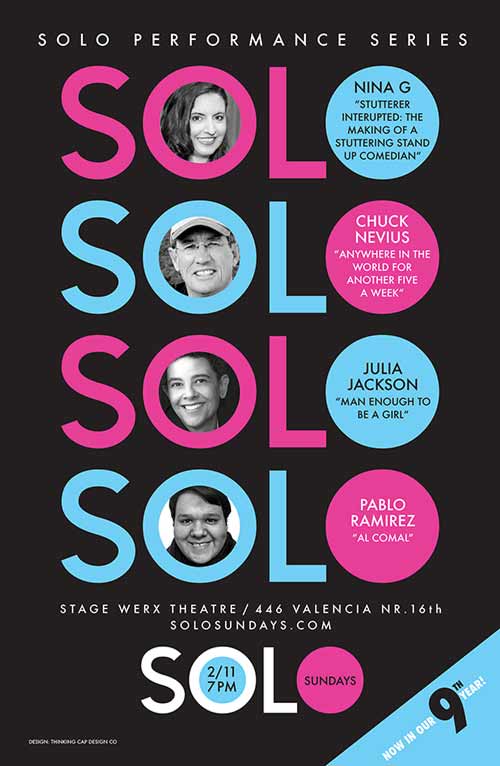 Nina began performing comedy nearly eight years ago. In a profession where women are outnumbered and people with disabilities are rare, Nina made a point of billing herself as “San Francisco’s only Female Stuttering Comic.” Much of her comedy springs from the idea that the main “issue” with disability is society’s inability to deal with it.

Nina often performs as part of the Comedians with Disabilities Act, a comedy troupe consisting of (you guessed it) comedians with disabilities. The troupe’s debut album, Disabled Comedy Only, has the distinction of being the first comedy compilation to feature only disabled comedians.

Stutterer Interrupted will premiere as part of the ‘Solo Sundays’ series, a monthly showcase produced by Bruce Pachtman at the Stage Werx theater. In addition to Nina, the evening will feature additional performances from Chuck Nevius, Julia Jackson, and Pablo Ramirez. Nina will be donating all her proceeds to the American Institute for Stuttering.

After premiering the show in her native Bay Area, Nina plans to tour Stutterer Interrupted across the country and publish her stories in a book under the same title. She currently tours around the world as a comedian, storyteller, and keynote speaker.

For information on Solo Sundays and tickets go to: http://www.solosundays.com.

About the American Institute for Stuttering:
The American Institute for Stuttering Treatment and Professional Training is established as an independent non-profit corporation, a tax-exempt organization under Section 501(c)(3). AIS offers a range of services including early intervention for children as young as two years old, individual therapy for children and adults, specialty group workshops, a weekly practice and support group, and week-long immersion programs that run throughout the year. AIS can be visited at www.stutteringtreatment.org.

Editorial Note: news based on press release as provided by Nina G, and was not created by California Newswire.