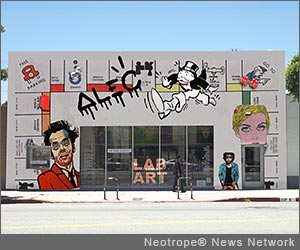 "Park Place," ALEC Monopoly's first solo show in Los Angeles, will showcase 360 of the artist's past-to-current paintings as seen on the streets worldwide, primarily featuring the artist's satirical use of the iconic mascot from Hasbro's MONOPOLY board game, Monopoly Man (a.k.a. Mr. Monopoly, Rich "Uncle" Pennybags).

"MONOPOLY has always been a great way to learn how the world turns," said the artist. "And with all games, as in life, we have the opportunity to start-over in order to succeed."

"By using imagery from the game, I think the artist could inspire people to earn money in what is still a tough economy," said LAB ART's Iskander Lemseffer.

"ALEC and LAB ART will be the first artist and gallery to make a MONOPOLY money transaction," said publicist Cory Allen. "MONOPOLY money is no longer play money."

Actor Adrien Brody will land on "Park Place" opening night with his 1964 Pontiac Catalina, which carries a $500,000 price tag. The Oscar(R)-winning actor is furnishing the collector car to be painted for the event as a real-life designer game piece by the L.A. Street Artist.

"I'm proud to support ALEC's vision," said Brody. "His work portrays a positive outlook in ways that reminds us that there is always a solution to a problem."

‘Money Is an Energy Game,’ Gold Winner of 2020 COVR Visionary Awards for e-books, is now available in print