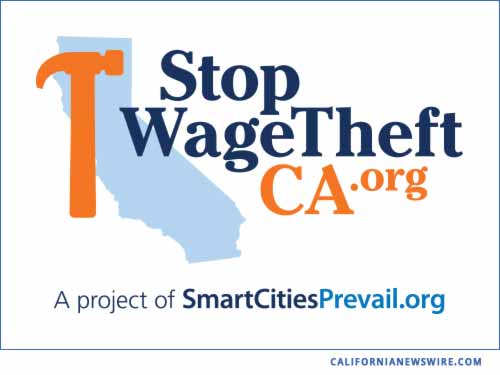 According to recent research by the Little Hoover Commission and Economic Roundtable, wage theft and the underground economy currently costs California taxpayers $8.5 billion per year in addition to the direct impacts on workers who are shortchanged in their paychecks. This is equivalent to 60% of California’s higher education budget. Claims are only filed in a fraction of cases, and even where judgments are issued against lawbreaking employers, claimants are paid less than 20% of the time.

In the Construction industry wage theft currently costs workers $1.2 billion, and taxpayers another $774 million, each year. One in six California Construction workers currently faces some form of wage theft.

“Workers are not the only victims of wage theft – taxpayers and law abiding businesses across our state are being shortchanged,” said Smart Cities Prevail Director and Wall and Ceiling Alliance Executive Director Frank Nunes. “We can do much more than just provide state agencies with more enforcement resources – working at the local level to disrupt the corrupt business models and institutional barriers that have enabled this problem to flourish. We must engage both taxpayers and local policymakers in the vital work of prevention, outreach, and mitigation.”

Smart Cities Prevail is a leading construction industry research and advocacy organization. More information on us may be found at http://www.smartcitiesprevail.org/, or on Facebook and Twitter. StopWageTheftCA.org is a project of Smart Cities Prevail.