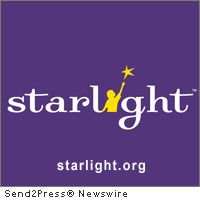 BOSTON, Mass., June 14, 2011 (SEND2PRESS NEWSWIRE) — On Saturday, June 25, 2011, Starlight Children’s Foundation™ New England will host the “STARmazing Race.” Now in its fifth year, the STARmazing Race remains the most hilarious and unique scavenger hunt in Boston. Hundreds of Starlight supporters take to the streets in teams of two to four people in a race against the clock – and each other – while winning prizes and raising funds and awareness for Starlight.

The STARmazing Race begins at noon at California Pizza Kitchen, located at 800 Bolyston St. at Prudential Center. Teams will then spend the next three hours collecting unusual clues and completing crazy challenges sponsored by the Boston Ski and Sports Club, Union Oyster House, Shops at Prudential and other spots before reaching the finish line and celebration awaiting them at Lansdowne Pub.

To join the race, teams of two to four must register online before June 24 at www.starlight.org/newengland . Price to participate is $50 per person, which includes lunch, snacks and prizes.

Race sponsors are already offering special promotions to get a head start on raising funds for
Starlight.

• Throughout June at J.P. Licks, customers who donate $1 to Starlight will receive a $1 coupon for homemade ice cream or freshly roasted coffee.

Local review site Yelp has officially signed on to be this year’s Media Sponsor of the STARmazing Race, highlighting the event to its Elite Squad, hosting a YELPridy Challenge along the race route and featuring the event in its weekly popular newsletter, The Weekly Yelp.

To learn more about the STARmazing Race, visit www.starlight.org/newengland or call 617-241-9911.

About Starlight Children’s Foundation:
When a child or teenager has a serious medical condition, everyone in the family is affected. For more than 25 years, Starlight Children’s Foundation has been dedicated to helping seriously ill children and their families cope with their pain, fear and isolation through entertainment, education and family activities. Starlight’s programs have been proven to distract children from their pain, help them better understand and manage their illnesses, and connect families facing similar challenges so that no one feels alone. Through a network of offices, Starlight provides ongoing support to children, parents and siblings in all U.S. states and Canadian provinces with an array of outpatient, hospital-based and Web offerings. Programs are also delivered internationally through affiliates in Australia, Japan and the United Kingdom. To learn more visit www.starlight.org .

Costs associated with dissemination of this news announcement were donated to SCF by Neotrope®.

News Source: Starlight Children’s Foundation :: This press release was issued on behalf of the news source by Send2Press® Newswire, a service of Neotrope®. View all current news at: Send2PressNewswire.com .