LOS ANGELES, Calif. /California Newswire/ — Starlight Children’s Foundation (starlight.org) will present Teri Hatcher with its 2009 “Heart of Gold Award” at the organization’s annual “A Stellar Night” gala, presented by California Pizza Kitchen, on Friday, March 27, 2009 at 7 p.m. at The Beverly Hilton Hotel. Starlight’s “Jacki Carlish Humanitarian of the Year Award” will be bestowed upon Nintendo of America and its President and COO, Reggie Fils-Aime. Starlight spokesperson Jamie Lee Curtis will present the awards, and Corbin Bleu and Chef Jeff Henderson will make a special appearance. 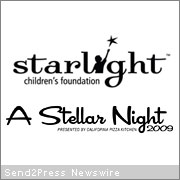 Hosted by Dave Koz, chaired by Starlight supporters board member Sarah Grover and CAA television executive Danny Grover, John Rosenberg and David Getson of gNet-Media, “A Stellar Night” will spotlight inspirational stories from Starlight families and pay tribute to humanitarians who are helping seriously ill children and their families cope with their pain, fear and isolation.

Famous for its Very Important Kid (VIK) Lounge, “A Stellar Night” invites adults to bring children to teach them firsthand about the importance of philanthropy and to share with them the impact that Starlight’s programs have on families with seriously ill children…brightening their world, a little each day. Game Crazy is sponsoring this year’s VIK Lounge.

Additional sponsors of “A Stellar Night” include Colgate-Palmolive Company, Nintendo of America Inc. and The Walt Disney Company. Further celebrity guests will be confirmed as the event nears.

When a child or teenager has a serious medical condition, everyone in the family is affected. For 25 years, Starlight Children’s Foundation has been dedicated to helping seriously ill children and their families cope with their pain, fear and isolation through entertainment, education and family activities. Starlight’s programs have been proven to distract children from their pain, help them better understand and manage their illnesses, and connect families facing similar challenges so that no one feels alone.

Through a network of chapters and offices, Starlight provides ongoing support to children, parents and siblings in all U.S. states and Canadian provinces with an array of outpatient, hospital-based and Web offerings. Programs are also delivered internationally through affiliates in Australia, Japan and the United Kingdom.