UPLAND, Calif. — Before the “Go Green” movement began, well known hit songs such as “Country Roads,” “Rocky Mountain High” and “Sunshine on My Shoulders” tied music together with the environment years before it was socially popular. Long before “carbon foot printing” became a household word, John Denver created “Plant It 2000,” a nonprofit foundation dedicated to properly planting, maintaining and protecting as many indigenous trees as possible worldwide. The organization is still around today with an up dated name “Plant it 2020.”

From the late 1960’s until 1997 John Denver had built a vast legacy of songs that spoke about caring for our mother earth and each other. A decade after John Denver’s passing, his message still rings true in Jim Curry’s Tribute to the Music of John Denver. 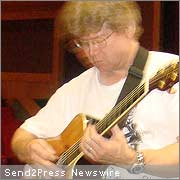 Headline entertainer Jim Curry has become the top performer of John’s music singing to over 70,000 people last year alone, and the numbers keep growing. Curry’s Vegas show is a sold out hit five years running. Jim is now bringing this must-see multimedia concert to performing arts centers across the country. The tour begins July 1st at the Gallo Center for the Arts in Modesto, California. Show time is 7:00 p.m. in the Foster Family Theater.

Tickets are available on-line at www.galloarts.org or by calling the box office at (209) 338-2100. Information for all remaining concert dates is located online at www.jimcurrymusic.com.

Jim sang as the voice of John Denver in the CBS made for TV movie “Take Me Home, The John Denver Story.” Jim Curry delivers a powerful performance of John Denver’s timeless hits, and introduces newer less known Denver songs as well as some of his own.

Jim has performed with many former John Denver band members. Jim Connor is the author of “Grandma’s Feather Bed” and is a regular guest in Jim’s Las Vegas show. Curry has just recently returned from a performance on a South Africa and Egypt Cruise with Jim Connor. Dick Kniss, best known as the bass player for Peter Paul and Mary and co-author of “Sunshine on my Shoulders,” also performed with Jim Curry last October in Aspen along with the legendary Elvis Presley guitarist James Burton and John Denver band member and author of “Christmas for Cowboys” Steve Weisberg. Jim’s special guest for the Aspen show was John Stewart of the Kingston Trio. Jim also shared the stage a couple of times over the past four years with Joe Frasier who is a member of the Mitchell Trio in which Denver also got his start in the music business.

Jim will be backed by his own top notch band for the Dream Tour. There is Diane Ireland on flutes, Gene Wagner on drums, Steve Gold on keyboard, and Tom Williams on bass. Standing beside him on stage is his wife Anne playing mandolin and guitar and singing harmony.

The Dream tour heads north to Oregon, Washington, then into British Columbia and over to Alberta, Canada. Other venues across the USA are being scheduled throughout the year and into 2009. And if that is not enough you can catch Jim’s performance, in between tour dates, on Holland America Cruise Lines. It is a lot to keep track of, but you can get all the dates, times and cruises on Jim’s website www.jimcurrymusic.com.

[tags]Jim Curry Dream Tour, Tribute to the Music of John Denver, Gallo Center for the Arts in Modesto[/tags]