SAN FRANCISCO, Calif. /California Newswire/ — As we reign in the end of 2019, many are reflecting back to their achievements within this year. Without a doubt, this past year the religious realm has seen progressive developments however, none has made such achievements as Shincheonji Church of Jesus. 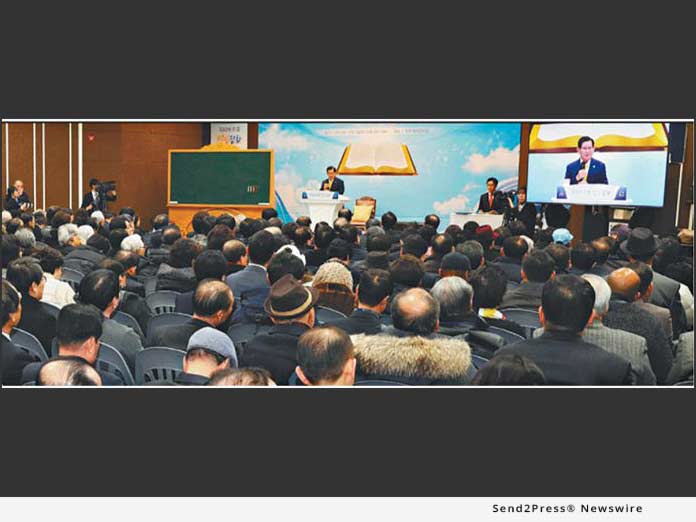 Shincheonji Church of Jesus the Temple of the Tabernacle of the Testimony is ahead of its time as it continues to set new trends within religion. Though its origin began with a few, starting out with only Chairman Man Hee Lee, Shincheonji has now gained a massive following of 300,000 and continues to grow due to its clear interpretation of the Bible.

Shincheonji is making accomplishments that no other religious organization has seen nor ever attempted.

A few of the achievements that Shincheonji has made just within the latter half of this year are the following:

100,000 Graduation: On November 10th, Shincheonji held a ceremony for 103,764 graduates. All of whom studied with Shincheonji’s Zion Mission Center. Through their own will, these graduates moved from their previous churches to Shincheonji Church of Jesus stating that Shincheonji gives “clear interpretation of the Bible using the principles of the 5 Ws and 1H versus, while many churches emphasis on worldly success.

Community Open Bible Seminar: Not only did Chairman Man Hee Lee speak to religious leaders, but all 12 tribe leaders of Shincheonji and over 70 branch churches head lecturers spoke to the public on the topic of “Harvesting and God’s Purpose the Creation of a New Thing.” After speaking these seminars, a whopping 70,000 people registered to learn the Bible through Shincheonji’s Zion Mission Center.

Shincheonji continues to progressively grow at a pace that other religious organizations cannot follow. It has become the light and salt of the world with all its members actively participating to benefit the society, to make the world a better place and the heal all the nations.

[Shincheonji] Open Bible Seminar on the Second Coming and Harvest(10.4 Seoul)
Watch this video on YouTube.
Church of Jesus has become to trend setter for all religious organizations, and continues to achieve unprecendented and revolutionary triumphs.


Shincheonji volunteer organization is sharing love for everyone
Watch this video on YouTube.