The songwriter round is set for Friday, August 9 from 9-11pm in the famed Nashville venue

NASHVILLE, Tenn., Aug. 3, 2013 (SEND2PRESS NEWSWIRE) — When Nashville’s finest songwriters are also singers, sooner or later they will be showcasing their creations in a writers round like the Shane Barrett-produced show set for Douglas Corner Cafe on Friday evening, August 9. “This is a terrific line-up of songwriters,” states Jane Bach, who will be joined by Brian White, Shaye Smith, and Tammy Hyler at the famous venue in downtown Nashville. 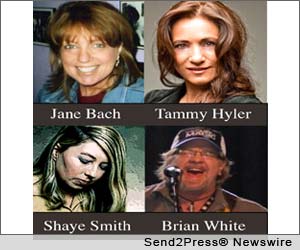 Jane Bach and other hit songwriters perform a writers round at Douglas Corner Cafe on August 9.

An outspoken proponent of songwriter rounds in cities from coast to coast, Bach is a Grammy nominated, multiple-award-winning writer of hit recordings by Reba McEntire, Ray Price, Jo Dee Messina, Tammy Wynette, Collin Raye, and many others. Bach’s “The Last One to Know” is still one of Reba McEntire’s biggest selling singles.

In the classic format of a round, each songwriter plays one of their songs, followed by the next writer, and the next, and so on. They can join in with each other, add harmonies, contribute a guitar riff, perform a little percussion, or just listen along with the audience.

“It is always a thrill to play this legendary club,” says Bach, a founding member of the new organization, Writers-Round. “Artists who have played Douglas Corner include Alan Jackson, Trisha Yearwood, The Kentucky Headhunters, Mark Collie, Jewel, Billy Dean, John Berry, Blake Shelton, Garth Brooks, and many others,” notes Bach.

For more information about this event or to schedule an interview with Jane Bach, please visit www.writers-round.com.

CAPTION:
Jane Bach and other hit songwriters perform a writers round at Douglas Corner Cafe on August 9.

View all current news at: https://www.send2press.com/newswire/ .