SAN FRANCISCO, Calif. /California Newswire/ — Ballpark Gallery is hosting an autograph signing with San Francisco Giants first baseman Travis Ishikawa on May 16th, 2009. The signing will be held 1 hour after the game. The fundraiser consists of 25 percent of all proceeds from the signing, and also 25 percent off all sales that day, will go to the Riordan High School sports program. 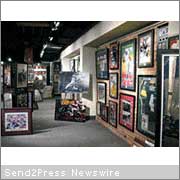 Patrick Sahagun, the fundraising chairman for the school sports boosters, is ecstatic that his school was chosen by Ballpark Gallery to be their first in store charity event. “It’s great when a local business steps up to the plate, and help school sports,” said Sahagun.

The tie-in with local charities was the idea of the new manager of Ballpark Gallery. John Waterman is a 25 year Rotarian and Chamber member and is known as a charity-aholic. “It’s always good to make the first thing you do at a new job, one of charity,” said Waterman. “I love that the owners said yes with out even having to think about it.”

Ballpark Gallery will be looking for other local schools to help too, at upcoming signings; so if your school needs help, give Ballpark Gallery a call at 415-543-9001, or email them at mark@ballparkgallery.net.