SANTA CLARA, Calif. /California Newswire/ — SecuGen Corporation and SafeDefend LLC have teamed up to create the SafeDefend Personnel Protection System and will be demonstrating the product at the 2018 Consumer Electronics Show (CES) in Las Vegas. 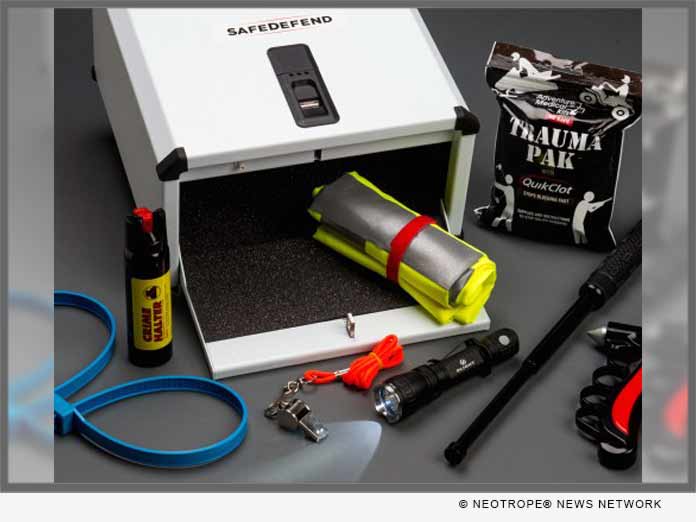 The SafeDefend Personnel Protection System by SafeDefend, LLC is a state of the art, fingerprint activated safe that allows for controlled access and secure storage of items such as: gel pepper spray; a baton with a window break; trauma kit; safety vest; flex cuffs; high-intensity strobe flashlight; and a whistle. When activated, the system instantaneously alerts a nationwide monitoring company and sends a text alert to personnel at the workplace. Local law enforcement is immediately notified of the building and precise area where the system was activated, identifying the location of the threat. In addition, law enforcement is also notified of the identity of the individual person who initiated the alert.

The SafeDefend system features the SecuGen U20-SFR OEM fingerprint sensor and an industry standard networking system. The first in SecuGen’s new Unity family of fingerprint products, the U20-SFR combines SecuGen’s U20 sensor and a Single Board Computer that sports a 1 GHz CPU and provides a fully programmable Linux environment.

SecuGen will be highlighting the SafeDefend System in its booth at CES in South Hall of the Las Vegas Convention Center, # 21767. SecuGen will also be showing its world leading line of optical fingerprint readers including, the FAP 20 certified Hamster Pro 20 based upon the same U20 sensor as well as the soon to be released Hamster Pro 10.

Jeff Green, President of SafeDefend, said, “We selected the SecuGen U20-SFR stand-alone sensor because of the quality of SecuGen’s products. The capability of the U20-SFR is amazing, and the price is very affordable. The fingerprint sensor is a critical component of this product.”

Won Lee, CEO of SecuGen, added, “SafeDefend is a great partner. They have taken our OEM sensor and embedded it into a product that is designed to provide maximum safety and security. We have been impressed with their technical prowess every step of the way.”

Known for high quality, ruggedness, and price-performance, SecuGen’s products are used across a wide range of industries, market segments and applications around the world including insurance and banking, medical and health care, point of sale, logical and physical access control, mobile devices, AFIS and law enforcement, and national ID and voter ID projects. Learn more at: http://secugen.com/.

The SafeDefend Personnel Protection Systems program was founded in 2013 by Jeff Green, a former elementary school teacher and principal for 16 years. Following the Sandy Hook tragedy, Green realized that schools were missing critical elements in addressing a crisis.

SafeDefend was developed alongside local and national threat assessment experts, law enforcement, police chiefs, and sheriffs. SafeDefend prepares schools, hospitals, government buildings, and corporate offices on what to do during the critical minutes leading up to the time first responders arrived on the scene. For more information, visit http://www.safedefend.com/.