SAN FRANCISCO, Calif. — Barry Williams aka Greg Brady from the Brady bunch will be doing an autograph signing at “Field of Dreams” at Pier 39 in San Francisco. So come meet Barry 12 p.m. to 5 p.m. at Field of Dreams. “The store is located at the end of Pier 39, with the sea lions behind us, and the carousel in front of us,” said John Waterman, manager of the store.

John’s great niece Alicia, 18 months ago was mauled by her Lab, and has had 7 operations at Children’s Hospital in Oakland. “They have been great to her,” said John. “We are doing a fundraiser with Mr. Williams, and donating $5.00 from each autograph signed at Field of Dreams.” Just bring in a copy of this article, and meet Barry and help Children’s Hospital at the same time. 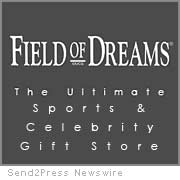 Born September 30, 1954 in Santa Monica, California, Barry Williams Blenkhorn was raised in Pacific Palisades, CA. He began studying acting at age eleven. He made several television commercials before making his TV series debut at age twelve in Run For Your Life.

As Greg Brady, Barry became something of a teenage idol receiving about 6,500 fan letters per week by 1971.

On the lighter side, Williams made over 150 episodic TV appearances in such homespun fun as: That Girl, Full House, Murder She Wrote, General Hospital, and Three’s Company.

Not one to stay out of the public eye for long, in 2002 Williams appeared in a televised boxing match between himself and former Partridge Family star Danny Bonaduce. Though Williams didn’t win that fight, he did donate all of his earnings from the event to charity.

Barry also co-authored his autobiography, “Growing Up Brady,” a best-selling account of his life. Today, he continues to lecture and tour the college circuit and beyond, bringing to the masses his tales of The Brady Bunch as well as appearing in musical theater.

So come relive the Bradys, and get Barry’s autograph, this Saturday May 3rd Noon to 5 p.m. at Field of Dreams, Pier 39, San Francisco. Call 415-433-3500 or email pier39 @fieldofdreams.com for more information. Website: http://www.fieldofdreams.com.