SAN FRANCISCO, Calif. — In his much-anticipated return to San Francisco, the legendary singer and character actor, Jim Bailey, will perform at the Herbst Theatre on December 20 in, “Jim Bailey as Judy Garland Live in Concert.” Accompanied by a full orchestra, Jim will perform Judy’s Christmas classic, “Have Yourself a Merry Little Christmas” as well as other favorite hits including: “Over the Rainbow,” “Get Happy,” “You Made Me Love You,” “The Trolley Song,” “Swanee,” “Rockabye,” and “The Man that Got Away.” 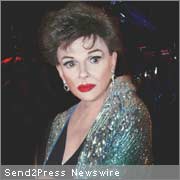 Jim had the pleasure of performing on stage with Judy in 1968, the year before she passed away. Judy witnessed a young Jim who was just starting out as a performer and she joined him on stage where they sang together. Bailey later went on to re-create Judy’s mother-daughter concerts with Liza Minnelli.

After performing on the Ed Sullivan Show in 1970, Jim became a phenomenon. Operatically trained and acclaimed worldwide, he went on to appear on The Tonight Show, the Carol Burnett Show and numerous other variety shows that were popular during this era.

Jim also played Carnegie Hall (recorded and released) and had several runs at the London Palladium and the main showrooms in Las Vegas and Atlantic City. He also performed for four American Presidents and The Queen of England, Princess Diana and Prince Charles.

In 1978, Jim performed at the Super Bowl and then at the Olympics’ opening Ceremonies in 1984. He has had at least 60 guest starring roles on TV from “Here’s Lucy” to “Ally McBeal.”

Jim’s performances have been reviewed in several international cities. The San Francisco Chronicle raved that the show was, “One of the most astonishing acts to ever trod the boards.” The London Times noted that, “He defies disbelief.” The New York Times said, “He is the supreme consummate performer.” The Boston Globe stated, “He is an inspiration; the next best thing to Garland herself.”