SAN FRANCISCO, Calif. /California Newswire/ — On Thursday, S.F. Mayor Edwin M. Lee delivered his 2015 State of the City address at the recently completed Phase One expansion site of the San Francisco Wholesale Produce Market – the first new Production, Distribution, and Repair (PDR) space in San Francisco in more than a decade – in the Bayview Hunters Point neighborhood. Joined by civic, labor, business and community leaders, Mayor Lee outlined his goal of shared prosperity through his Affordability Directives with the City’s investments in housing, education, transportation, women’s empowerment and anti-poverty in his third State of the City address. 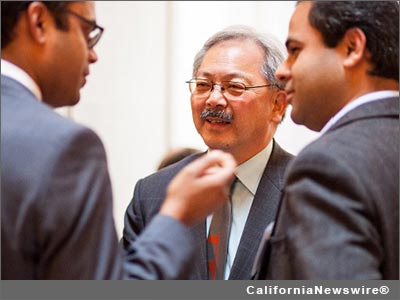 “The State of our City is strong and getting stronger, and we must remain focused on keeping San Francisco affordable for everyone,” said Mayor Lee. “With our strong economic foundation, we have a special opportunity to change this City for the better, to see that San Francisco is affordable for families, and ensure that every San Franciscan shares in our City’s rising prosperity. We must remain focused on our most pressing issue of housing, making sure our youth have a world class education, improving our transportation system, empowering women through economic and social advancement, and combatting poverty. Through these Affordability Directives, we can together ensure that San Francisco remains a City where everyone belongs.”

In his State of the City Address, Mayor Lee lays out a work plan that will move the City toward the goal of shared prosperity. Mayor Lee’s Affordability Directives focus on housing, education, transportation, women’s empowerment and anti-poverty.

Housing
Every San Franciscan deserves safe, secure, stable housing. Mayor Lee’s Affordability Directives, and specifically the first directive, will help ensure that the housing we have will remain in the hands of our working families, and that the units we build, will go to the San Franciscans who need them. To ensure that our residents can attain, and keep safe, secure housing, Mayor Lee will:
• Expand Funding to Keep Residents In Their Homes. We will direct more dollars toward rent support so people do not lose their homesand eviction defense so they can stay in their homes. We will also initiate programs to help tenants buy their own rent-controlled buildings.
• Increase Down Payment Assistance for Moderate and Middle Income San Franciscans. With the support of San Francisco’s Retirement Board as a partner, we will increase loans for first-time homebuyers by $100 million dollars over the next 10 years. This will translate directly into homeownership for up to 150 more families every year.
• Reform the Ellis Act to Prevent Speculation. With Senator Leno and Assemblyman David Chiu, we will pursue changes to the Ellis Act at the state level, so it cannot be misused by speculators to evict long-time tenants for profit.
• Place an Affordable Housing Bond on the November 2015 Ballot. The proceeds of this bond will support our ambitious plans to rebuild San Francisco’s public housing, and will fund the acquisition, rehabilitation and construction of homes for a range of households, from very low income to middle class, working families.
• Create a New Investment Fund to Launch More Affordable Housing Projects. The Mayor will create an accelerator fund, with private and philanthropic partners, to accompany bond financing, seeding public-private partnerships that will enable nonprofits to act quickly and complete on the open market topurchase land for construction of affordable housing and buildings to be improved as permanently affordable units.
• Expand the City’s Pipeline of Middle Class Housing. The Mayor will initiate the Public Lands for Public Good program, building mixed-income housing on surplus public land, including permanently below-market housing and housing for San Francisco’s middle class.

Education
• Universal Pre-K for All 4 Year Olds. Because of the voter approval of Proposition C to renew the Children’s Fund and the Public Education Enrichment Fund, the City will invest the funds necessary to finally clear the waitlist for all 4-year olds who need preschool, adding slots for more than 4,000 families over the next five years.
• Universal Afterschool & Summer School. Working together with the Board of Supervisors and Board of Education, Mayor Lee will create universal afterschool and summer school for all K-through-8 students, regardless of income, through the City budget this year. More time in school and activities is better for kids and better for parents.

Transportation
• LRV Expansion. This week, Mayor Lee announced 40 new light rail vehicles, increasing Muni’s next generation light rail fleet to 215 cars – the most in our City’s history. This will make the Muni system faster and more reliable for its riders.
• Free Muni for Seniors & Disabled. Last year, and for the next three years, Google funded free Muni for low-income young people. Mayor Lee calls upon the SFMTA to expand free Muni to low-income seniors and people with disabilities. And also calls on the private sector to step up again, and follow Google’s lead to fund vital transit service for the City’s most vulnerable, low-income residents.
• Pedestrian Safety. Because of the voter approval of the $500 million transportation bond, San Francisco is making streets safer for pedestrians and bikers, and making Muni system safer and more reliable. In 2015, San Francisco will complete safety treatments along at least 13 miles of the high injury street network to reach Vision Zero, to eliminate traffic fatalities and severe injuries for all road users.
• 2nd BART Tube. Mayor Lee will begin a regional conversation with fellow Mayors in the East Bay and Supervisor Scott Wiener about a second BART tube from Mission Bay to the East Bay.
• Major Expansion of Bike Share. Mayor Lee will join other regional governments and the private sector to support efforts to significantly expand bike share in the Bay Area.

Women’s Empowerment
• City Employment Opportunities Equity Initiative. Effective today, Mayor Lee is ordering a review to identify and eliminate barriers that prevent women from achieving equity in hiring, salaries and promotional opportunities in City government employment. The public sector must lead the way and set an example. Mayor Lee calls upon the private sector to do the same, especially San Francisco’s technology sector, where gender parity, equal pay, and diversity are still lacking profoundly.
• Women’s Empowerment Summit. With Oakland Mayor Libby Schaaf, Mayor Lee will convene a Women’s Empowerment and Opportunity Summit to propose legislation, as well as public and private sector initiatives, to improve economic and social opportunities for women in our City and region.
• No More/Nada Mas. Increased efforts to prevent and protect against domestic violence, in 2015, San Francisco will recover our national leadership and say “NO MORE….NADA MAS.”

Anti-Poverty
• Breaking Cycle of Family Poverty. To fight poverty, Mayor Lee has set a renewed focus on attacking poverty at its roots. He launched Project 500 – a laser-like focus of intensive resources, wrap-around services and case management across City departments and nonprofit providers for at least 500 of the City’s most at-risk families, to give them meaningful pathways out of poverty and disrupt intergenerational transfer.
• HOPE SF. Along with Board President London Breed, Mayor Lee has led an effort to transform federally-owned public housing sites into vibrant, mixed-use communities. In partnership with U.S. Housing and Urban Development Secretary Julián Castro, San Francisco is rehabilitating and rebuilding run-down public housing without displacing the residents who currently live there.
• Homelessness. In addition to implementing Laura’s Law for the most severely mentally ill, Mayor Lee will bring a stepped-up commitment on homelessness with up to 500 new transitional housing units, and a focus on mobile medicine for those still living on the streets. San Francisco is opening up a first-of-its-kind Navigation Center to better move people off the streets and into housing, and will be the first City in America to end chronic homelessness for veterans. Working with Supervisors David Campos and Scott Wiener, San Francisco will fully fund a special shelter for LGBT homeless population.

For more information on Mayor Lee’s State of the City address and the Affordability Directives, go to: sfmayor.org/sharedprosperity.