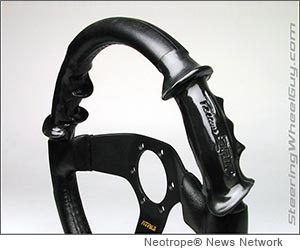 COSTA MESA, Calif. /California Newswire/ — PersonaGrip's Steering Wheel Guy, Ed Dellis, inventor of the custom-moldable handgrips used in auto racing and manufacturing, announces crowd-funding for his steering wheel grips. Poorly designed custom-molded steering wheel grips have been injuring drivers ever since the inventor's near-death experience pulled him away from racing over a decade ago.

"While I'm flattered that teams embrace the technology that I pioneered with PersonaGrip over two decades ago, it hurts me to see the teams now making the same mistakes I made when I first started molding grips back in the early-'90s," says inventor, Ed Dellis.

"With two decades and 759 steering wheel grips under my belt, I now have the experience to do what Roger Penske and Rick Mears asked me to do in Milwaukee after Emerson Fittipaldi won the '93 Indy 500 with Serial #001 wheel: tool up for Mass Production."

The healthy inventor is now launching for a limited-time – a crowd funding project at http://Indiegogo.com/SteeringWheelGuy where early investors can purchase – at half-price – pre-molded grip kits that introduce many new patent-pending safety features to prevent blisters in normal use and fractures on impact.

Dellis will raise $69,750 to fund the injection-mold tooling that will produce grip inserts that Master Certified Techs can install on trimmed, 1.0 inch-thick sections of steering wheels. The grips can then be heated and molded to suit a driver, or an entire team of drivers in endurance racing.

Kits will come in three basic forms:
* NASCAR Kits – Feature a smooth textured front side with finger grooves on the back.
* Road Race Kits – Wings, flutes, flanges, and rollers, all encapsulate the driver's hand for maximum leverage and improved feedback.
* Full-Wheel Kits – Contain both sets to cover their entire wheel with the same moldable material that Dellis blends from six materials to get the ideal feel and re-moldability characteristics.

As Mechanical Engineer and Driving Instructor, Dellis is intimately aware of what it takes to get a good grip on the steering wheel. Now, everyone can benefit from his decades' experience molding steering wheels for the best drivers in IndyCar, NASCAR, and Formula One.

Dellis also plans on returning to automotive factories to mold tools for assembly line workers. He continues, "Smart phones can now provide Community Tech Support since design challenges can be easily filmed, and quickly uploaded onto YouTube for discussion using an app currently under development."

"Turns out, early NIOSH research (1987 — Armstrong, Silverstein, and Fine) showed that when a worker is exposed to both high repetition and high grip force, the risk for Carpal Tunnel Syndrome increases ten-fold," cites Dellis.

This discovery led Dellis to introduce an Industrial Ergonomics training program where Dellis visited factories and trained workers on ways to re-think how they interfaced with the tools using leverage instead of friction to control the tool. With today's smart phone video capability, Community Tech Support is now possible across the globe in many languages.