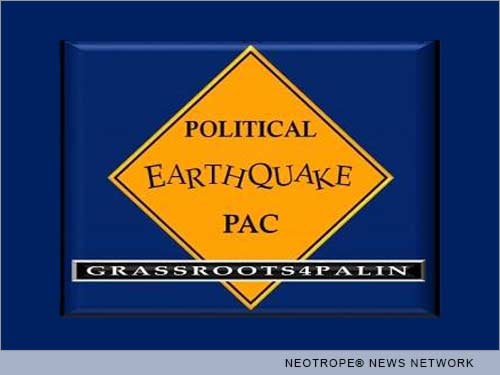 ALBUQUERQUE, N.M., Jan. 7, 2015 (SEND2PRESS NEWSWIRE) — Supporters of Governor Sarah Palin announce the formation of The Political Earthquake PAC/Grassroots4Palin, a Super PAC which will independently advocate on behalf of Palin and the leadership and vision that she has for our nation.

“The Earthquake will harness the power of Americans nationwide to support Governor Palin,” said Sandra Bailey. “America is struggling, and President Obama and Washington business-as-usual politicians are the problem. The Earthquake will support a leader who has inspired millions, who understands that government stands in the way of unleashing America’s entrepreneurial spirit, and who believes America must remain the world’s superpower.”

Bailey added, “America needs Governor Palin’s leadership as a commonsense Constitutional Conservative not to continue to fundamentally change America, but to restore America. The American people are ready for a leader with integrity, who has been thoroughly vetted and has proven she will work to rid our government of the cronyism that gets in the way of doing the people’s work.”

The Earthquake is a grassroots-powered organization administered by Sandra Bailey.

The Political Earthquake PAC is on a mission to shake the establishment to its core and offer to America, a candidate who not only is qualified and fully vetted, but also one who loves this Country, its military and citizens, and one who has the heart of a true public servant-leader.

This press release was issued on behalf of the news source (who is solely responsible for its accuracy) by Send2Press® Newswire, a service of Neotrope®.

GALLOSPOLE, a Music Peddler of Conspiracy Theories, Announces the Release of the Political Allegory, TARAC WIPPP

ITA and Getting to Global Announce New Partnership