NEW YORK, N.Y. — An exhibit dedicated to the memory of Oprah Winfrey’s late dogs opens in Manhattan’s west village, helping to promote pet safety awareness. A life-size monument depicts “puppy versions” of Oprah’s Cocker Spaniel Sophie and Golden Labrador Gracie atop the head of the talk show icon by controversial sculptor Daniel Edwards. The Puppies’ Memorial will be exhibited at Leo Kesting Gallery on May 22nd. “Memories of Sophie and Gracie: A Puppies’ Memorial” is inspired by the Oprah press releases that announced the passing of Gracie, who choked on a ball last year, and the passing of Sophie, who died in March.

“To represent Sophie and Gracie together, joined in Oprah’s memory as they were in life and in Oprah’s heart, the artist depicted them as conjoined at the hip and sharing a common tail,” says co-director John Leo. The dogs are shown standing on the flowing-maned golden likeness of Oprah’s head, in reference to how the dogs’ deaths may be weighing heavily on Winfrey’s mind. “Losing two beloved pets within a year is likely to take its toll on anybody.” 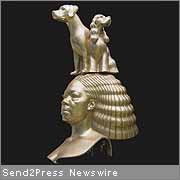 Last month, Oprah dedicated a show investigating abuses at puppy mills to Sophie, who died from kidney failure. “Sophie gave me 13 years of unconditional love,” Winfrey said on her show.

“Given the natures of the demise of Oprah’s dogs, we feel the horrors of a puppy mill could be inconsequential compared to the poison hazards pets face in the home. Leaving a puppy mill for a nice home could be like jumping from the frying pan into the fire for some pets,” says gallery co-director David Kesting. “According to the APCC (Animal Poison Control Center), the anti-freeze commonly leaked on garage floors, for example, is sweet smelling and tasting to pets, but it causes kidney failure and death.”

“The memories of Oprah’s pets could serve as a reminder to all pet lovers that this may be a good time to thoroughly ‘puppy-proof’ their pet’s habitats,” says Daniel Edwards.

“Sophie’s kidney failure may have resulted from natural causes, but we hope the Puppies’ Memorial will remind everyone that Gracie’s choking could have been prevented,” says Kesting.