CHICAGO, Ill. — With her endorsement of presidential candidate Barack Obama, Oprah is making known her views on the need for healthcare reform. But controversial sculptor Daniel Edwards is urging talk show host Oprah Winfrey to do more by taking the time on her show to reach out to the recently retired baby boomers for whom healthcare reform will come too late. Edwards is offering his latest creation to Oprah, to assist the television icon in breaking the ice with baby boomers to encourage them to prepare for their own funerals.

A gilded coffin lid bearing Oprah’s full-figured likeness with slimming vertical stripes, The Oprah Sarcophagus is designed for a look of cultural neutrality with respect to Oprah’s audience and the style of her magazine. “The Oprah Sarcophagus is the ideal visual aid for educating boomers about casket choices and memorial service arrangements,” says gallery co-director John Leo. “We would like to hear Oprah tell her viewers that a great coffin should be something of which to aspire, and that no one should have to settle for a pine box.” 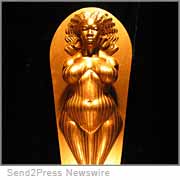 Edwards’ inspiration for the golden casket developed after reading how Oprah was in mourning over the death of her 2-year-old golden retriever, Gracie. Oprah recounted, “As I stood there dazed, stunned, crying over Gracie’s dead body I learned the lesson to enjoy life but remember to slow down, too.”

“It might slow people down in a self-reflective and spiritual way if they were to consider their own funeral,” said the artist, adding that inspiration for the Sarcophagus was reinforced by a headline he read in a grocery market checkout line, which suggested Oprah had only six years to live.

Edwards’s previous sculptures include a nude Britney Spears giving birth on a bearskin rug, an interactive autopsy of Paris Hilton with removable organs, and a war dead Prince Harry clutching the cameo-locket of his late mother Princess Diana.

The book, “The Oprah Sarcophagus” (ISBN: 1438206429), offers a behind the scenes look at the making of the sarcophagus, and is available at Amazon or http://www.leokesting.com/book/.