SAN FRANCISCO, Calif. /California Newswire/ — More than 65 years after the infamous crash, a major component of the James Dean Porsche 550 Spyder will be offered at auction, Don Ahearn, Owner, announced today. This will be the first time ever a confirmed part of the Porsche 550 Spyder will be offered for sale. The online auction is being held by Bring A Trailer, the largest enthusiast based online auction site for unique automobiles, parts and Automobilia. Bring A Trailer is based in San Francisco, California. 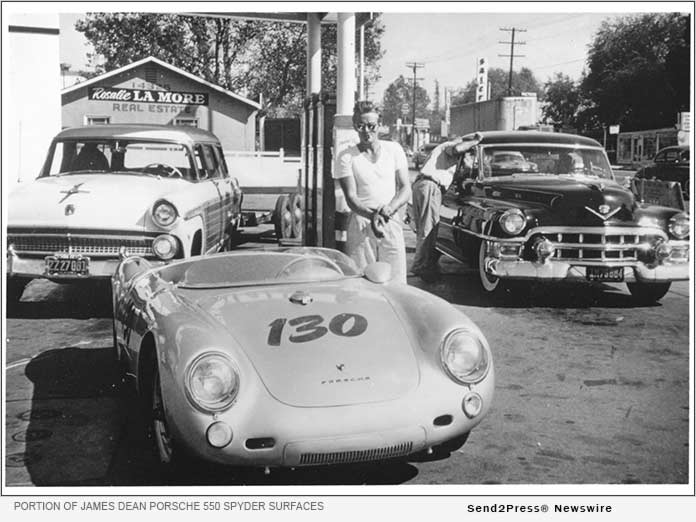 Found in rural Massachusetts, the original and complete transaxle assembly has seen the light of day after being stored in a wooden crate and hidden from public view for over 30 years. An East Coast Porsche collector unveiled this discovery last September from the car that many Porsche enthusiasts consider to be the most famous of the marque.

This assembly may be the only documented and provable part of the James Dean Spyder known to still exist, and it is certainly the only part anyone may be able to see publicly. It is one of three permanently traceable components of a 550 Spyder. These include; the chassis, the engine, and the gearbox/transaxle. This transaxle is stamped with the correct factory serial number #10046.

The history of James Dean and his 550 Spyder has been well written elsewhere so there is no need to repeat it here in detail.

The original body/chassis #550-055 was reported stolen in 1960 while returning from a highway safety exhibit, never to be seen again. There have been rumors in past years of the whereabouts of the lost wreck though none have been substantiated. The original engine #P90059 is reported to still be in California, though it has not been seen nor verified in decades. This gearbox assembly could be the only verifiable part of the famous car that will ever be available to be seen by fans of James Dean.

Now removed from the wooden crate, the transaxle is mounted in a display stand custom fabricated by expert metal shaper Steve Hogue. It displays the assembly exactly as it was in the original 550 Spyder.

Questions and inquiries should be directed to Marvin Waters, Auction agent for the owner swiftmotoring@gmail.com or James Dean Historian, Lee Raskin lmr356@aol.com