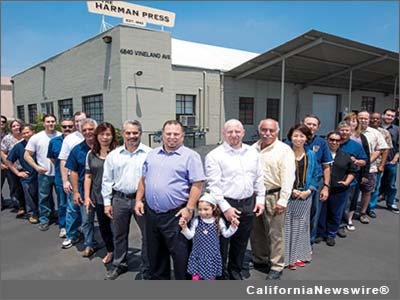 NORTH HOLLYWOOD, Calif. /California Newswire/ — The Harman Press has acquired Fox Printing and its staff, effective February 10, 2014, continuing expansion of its commercial printing business, and the consolidation of union printers in the Los Angeles area. Both companies are family owned and members of Teamsters Local 572.

Founded in 1943, The Harman Press delivers digital as well as lithographic printing services for a wide range of commercial client including major motion picture studios such as NBC Universal, 20th Century Fox, and independents such as The Weinstein Company. The Harman Press is known in political circles as print providers for local, state and national campaigns over the years. Other clients include healthcare giant Kaiser Permanente, and national businesses such as top auto auctioneers Gooding & Company.

Harman Press President Philip Goldner said, "We are pleased to welcome Gary Fox and his team as they join with us to continue to deliver the same high quality and dependability to their customers and our own. By doubling our sales force and adding new equipment, we look forward to expanding our business into the future."

Founded in 1936 by Dorothy and James Fox, Fox Printing has been headed by Gary Fox since 1980. Customers include the building trades, entertainment trades, Teamsters and many other unions.

Gary Fox said: "With Fox Printing joining The Harman Press, this makes Harman the strongest union printing facility in Southern California. Phil Goldner has a firm grip on the future and is a good leader. I think our customers will be more than happy."

The Harman Press re-located in January 2013 from its longtime address in Hollywood to a larger facility at 6840 Vineland Avenue, North Hollywood, CA 91605. Fox Printing will be closing operations at its shop, shifting all sales and production activity to The Harman Press, effective immediately.

About The Harman Press:

Based in Los Angeles' San Fernando Valley, The Harman Press utilizes the latest in printing technologies, alongside sheet-fed offset and letterpress, staying true to its legacy of craftsmanship while leading the way to the digital future. Family-owned since 1943, The Harman Press is a union shop, affiliated with Teamsters Local 572 and offers the Union Bug to customers-a sign of quality required by many political campaigners, municipal, state, and federal contractors, and customers valuing top-notch workmanship and workplace integrity.