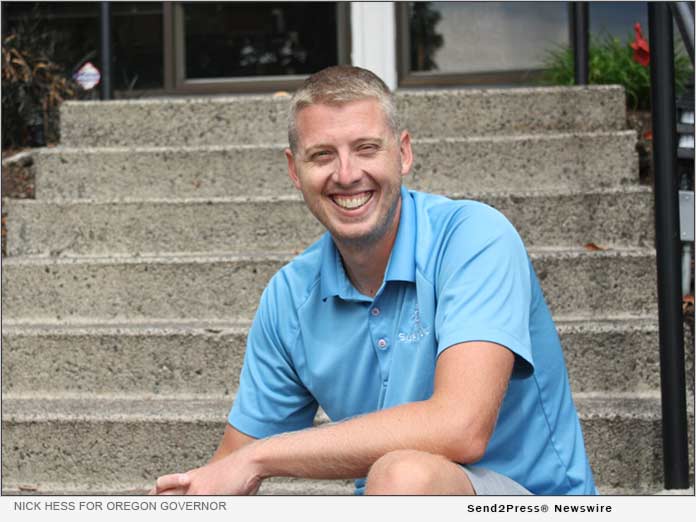 Mr. Hess is running as a moderate, fiscal conservative in hopes of bringing Oregonians together.

Nick Hess is an entrepreneur and business owner. He is a lifelong Oregonian. He grew up in Portland and graduated from Lincoln High School. At age 14, he started his first company–a residential IT business. With 21 years of real-world, business experience, Mr. Hess is well-versed in managing budgets, fostering relationships, and creating opportunities for growth.

Currently, he acts as CEO and owner of:

* SureTec IT (a cybersecurity and IT managed services provider located in Tigard, OR & Dayton, OH),

* Cookin’ Class ( a cooking class business he owns and operates with his wife, Christy, in Tigard, OR).

In addition, he is father to a 9-year-old son.

Nick Hess is running for all Oregonians stuck in the middle of the political divide. He is looking to give a voice to those who feel forgotten and left behind.

Mr. Hess’s campaign is focused on common-sense solutions for Oregon. As a business owner, he is comfortable making tough decisions, negotiating, and finding common ground.

His campaign will center around 4 main principles:

* Transparency
o Building trust through transparency. Oregonians should be allowed access to budget information and data collected by state agencies.

* Voice
o Giving Oregonians a voice through the creation of the Oregon Ideas Portal (www.ideasoregon.com). Every Oregonian–regardless of party affiliation–can directly voice their ideas, opinions, and concerns. Creating real change begins with a conversation.

* Re-envision
o Establish accountability and realistic solutions to Oregon’s drug and homelessness problem. Change the national image of Oregon and increase state tourism.
o Additionally, he wants to reinvigorate the police force by giving them the tools they need to operate effectively in 2022.

PAID FOR BY HESS FOR OREGON

This press release was issued on behalf of the news source, who is solely responsible for its accuracy, by Send2Press Newswire. To view the original story, visit: https://www.send2press.com/wire/nick-hess-announces-run-for-oregon-governor/